The End of an Era for Charleston South Carolina and the Low Country... So Long Les Langdale!

You are riding down the interstate, safe and warm in your vehicle. Suddenly and without warning, a truck-driver on the opposite side of the barrier elects to use an "official vehicle only" pass through, and pulls right into your path. You can't move right because there is a semi in the next lane. You slam down the brake pedal, but a speed of 75 miles per hour cannot be undone in an instant. You watch the event unfold as if in slow motion, but it happens in a blink. The nose of your car disappears underneath the side of the truck and then all is black...

When you come to, the first thing you feel is intense pain. To the point of nausea. Smoke and steam stink the air, and you can taste blood in your mouth and feel sharp edges where your teeth had been. You hurt. All over. Your legs feel loose and disjointed, and they hurt. 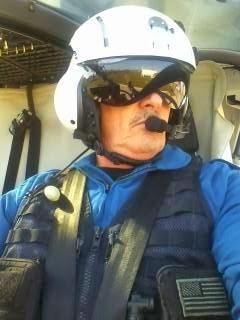 But when you hear the the sound of help coming, it's not God, it's a large angel in a blue flight suit. You can hear the helicopter landing as the firefighters cut your car in pieces to get you out.

You are surrounded by concerned faces, and cold, and shaking. A warm blanket is placed over you. A needle pricks your arm and a mask is put over your nose and mouth - don't throw up - you think to yourself. Then you are slid into the back of a helicopter, and you look up into the eyes of a friendly giant.

"Okay, we can help with that. What's your name?"

You don't know it, but everything Les says and does has a purpose. He and his partner will quickly assess you and determine what lifesaving care you will require on the way to the hospital. You are lucky, because this man has cared for thousands of souls, and knows exactly what to do and say with a minimum of fuss or drama. If you stop breathing, he will breathe for you. If your loss of blood lowers your blood pressure he will handle that too. He and his partner have you and you are safe.

Your pain leaves you and a feeling of peace overtakes you, and sleep...

You have met Les Langdale...and you are safe.

Les is retiring, after protecting people for decades. I have flown with him since 2001, and he taught me much about this business. It was a pleasure to work with you, sir...


Please join me in wishing him clear skies and tailwinds from here on out.
Today marks the end of an era. After nearly 3500 flights, Les is hanging up his flight suit. So many people in the Lowcountry and across South Carolina owe their lives to the skills and talents of him and his fellow flight crew members. He would say "Just doing my job!" I am so proud of him for the courage he has shown to close this chapter of his life and begin to write a new chapter. #myunsunghero #36
11 comments:


It isn't very often that you will live through flying a helicopter into the earth...

How far will you let me go before you say no...

This is on a slide that I use at the end of a role-playing scenario with the newest crew member in my class; me, and an old crusty. I talk to the oldster offline and tell him or her to play along with me as we proceed into a flight scenario with deteriorating weather.

It's a simple technique, and it makes the point - occasionally I your pilot will keep going when I should stop. There are many reasons for this phenomenon: hazardous attitudes, excessive commitment to the task at hand, incompetence... No matter. What you must do, Mr. or Ms. Crewmember is know when to say...

LifeStar Down...(note: there are many LifeStar HEMS programs, this is Martin County FL)

This is an update on the crash of an EC-135 police helicopter into a nightclub. 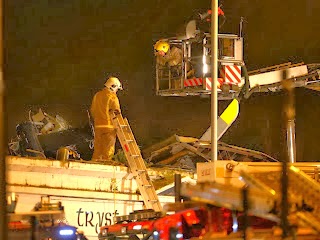 The investigation has revealed that at the time of the crash, the switches that control the pumps that transfer fuel from the main tanks to the engine supply tanks were off.

The orignal post regarding this event is available by clicking here

The main tanks had fuel in them, the supply tanks did not...

It looks as if this was a simple human mistake made due to what?

This exact event happened more than once in a BK. Omniflight lost an aircraft and had a crew seriously injured. The pilot had a flight early in the morning right after arriving for work. He inadvertantly left the instrument lights on, and couldn't see the low fuel and master caution segments illuminate. Both motors quit. The crew was injured, he was paralyzed.

The really ironic fact of this matter is that there is a way to correct for this human error, (forgetting to turn on transfer pumps). I used to fly a Dauphin, a French made helicopter. The Dauphin has supply tanks too, and transfer pumps. If you somehow forget to turn on the pumps in a Dauphin, there are small valved openings at the bottom of the supply tanks that will let fuel from the main tanks in, to at least the level of the main tank. It's an fool-proof feature.

I wonder why the Germans didn't think of this? Or change the BK design after a couple of crashes. The French guys work with the German guys now. For "Airbus." Speak up boys!

Later - I am going to write another post, and in it I am going to make a case for crewmembers in single-pilot helos calling out challenge-and-response checklists, but not today. Today I am going to consider, "but for the grace of God, there go I."

And think about all those dead people. 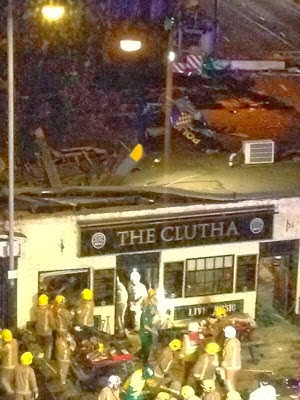 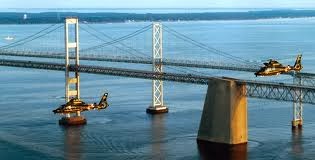 While flying to Macon the other night, I called Atlanta Approach and requested flight following. After a few minutes of quiet on the radio, the controller asked if I had time for a question.

"What exactly is it that you all do?"

"Well, tonight we are transporting a sick young patient from a small hospital to a large one where he can be taken care of by specialists. We also land at accident scenes and pick up trauma victims, from things like car crashes. Finally we transport little premature babies, as early as 24 weeks and less than two pounds."

A few seconds of silence...

"Thank you for what you do."

I reply, "Thank You sir. We could not do this without you."

That video made me miss flying the Penn State blue and white Dauphin. She was a screamer, and her wheels went up.

Mark Twain said "there are lies, damn lies, and statistics," but it's nice to have some validation of what we do. Dr. Brian Bledsoe, this one's for you...

What Was I Thinking?

Since posting this, my company has experienced another tail rotor strike at a hospital helipad - the misfortune fell upon a long time friend and coworker.

It could happen to you too...

I landed at a small hospital's helipad a few days ago, and had a near miss with an obstacle. And this is a topic that I have written about, and thought about, and talked about. What the heck?

On the way to the Raulerson Hospital helipad in the town of Okeechobee Florida, I asked the crew to tell me all about the hospital and the pad. They described it pretty well, a ground based cement square with trees and wires in the way. They mentioned that the other pilots would "fly past it and come back from the other way." As we approached, I got eyes on the pad and did my high recon. 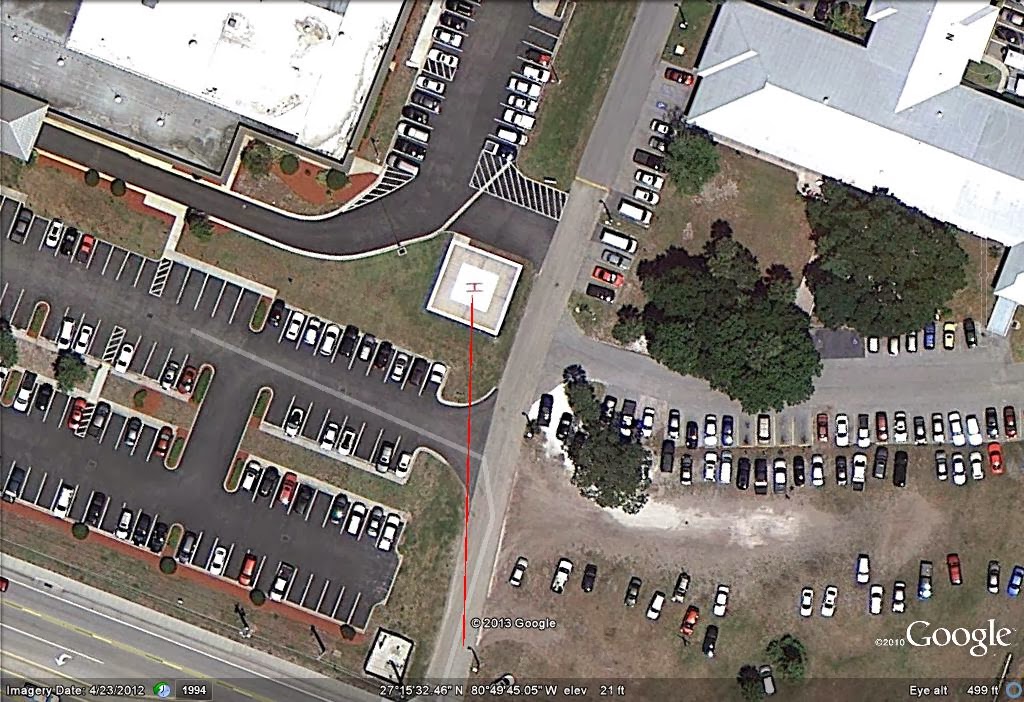 I could see what the crew was talking about as we approached from the top of the image (headed west), turned right, and made our final approach to the east  (see red line). The H is oriented approximately north/south, and the orientation of the H at a helipad indicates favored approach direction(s). In this case, trees block the north approach path, and a strong wind from the north ruled out landing to the south - downwind. I elected to take a crosswind from the left and flew in calling out obstacles and getting confirmation from the crew that we were clear of poles, wires, and the tree out the right door on short final approach.

As I came over the pad, I instinctively began to put my nose into the corner at the top of the image. Then a conversation with Toyanna Frye came into my mind - literally as I was hovering. Toy is a flight medic at Walterboro SC, who I fly with often. On a not-so-recent flight with her at Walterboro, as I was landing and putting my nose into a corner, she asked me to stop moving so far forward as it made it hard for her to load a patient without having the stretcher fall off the edge of the pavement. The pad at Walterboro is bigger, and obstacle free, so I accommodated her. (Being accommodating has caused much trouble and damage to helicopter pilots and helicopters in tight landing areas. After approach and landing safely, we move the aircraft to make things easy for the crew, and end up hitting things). So I was moving forward at Raulerson, then thought "better" of it and stopped, and landed. Perhaps it was a touch of cognitive dissonance.

I landed, shut down, and climbed out. This is what I saw. 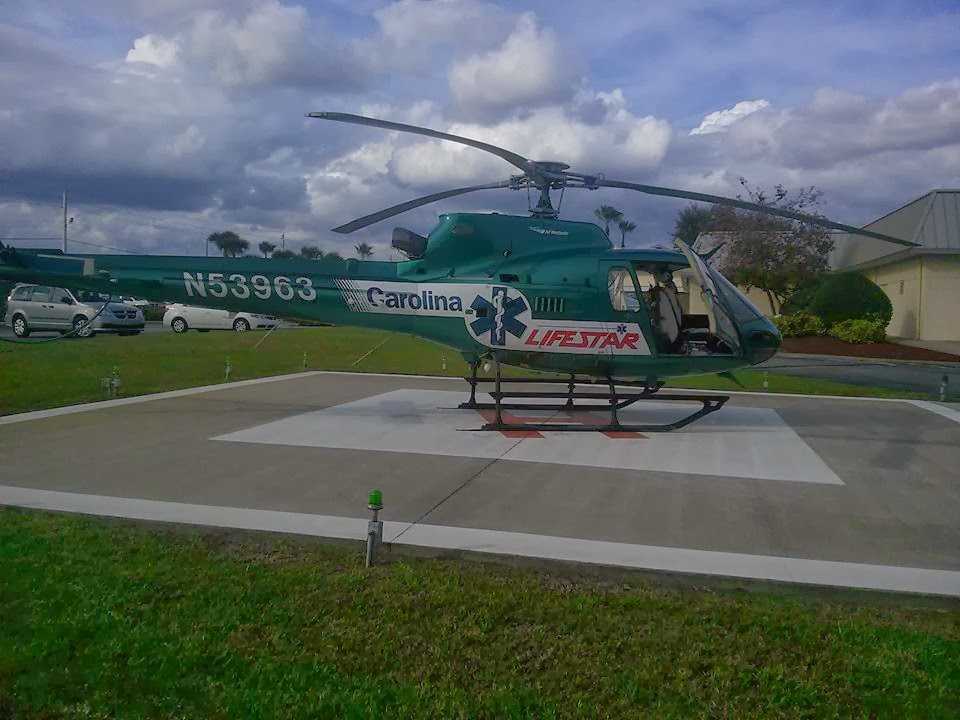 Without trying, I had landed right on top of the H. Force of habit... A bad habit...

I noticed that the lights stood up further than normal and presented a hazard to a low tail like on a Bell 222 or 230.  I walked around to the front. That's when I saw the real hazard, back behind the aircraft. 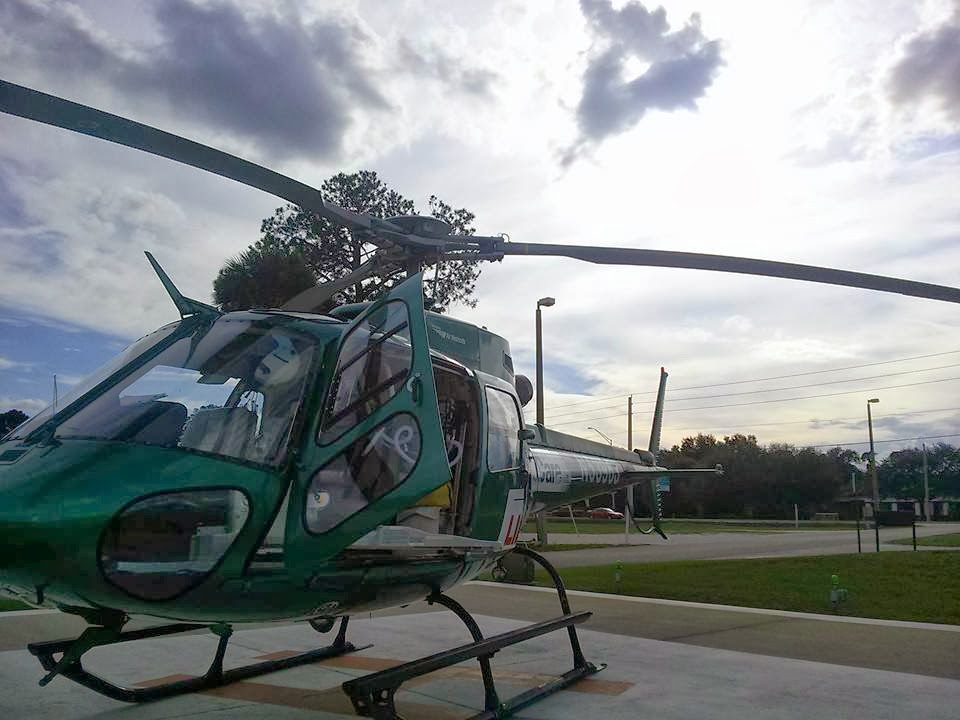 I walked to the rear. 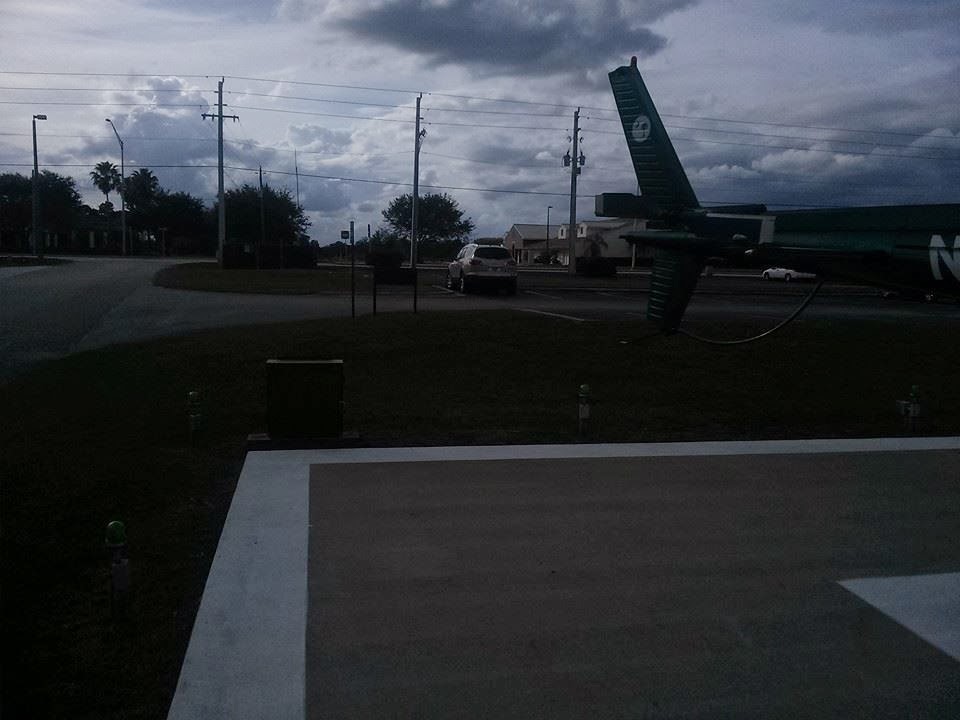 I never saw that electrical junction box, and it sticks up high enough to make contact with a low tail, especially on a long aircraft landed to the center of the pad.  My tail was about six or seven feet away from making contact, and if I had drifted or come in nose high...

At debrief I showed that picture to the crew who said, "been here a hundred times, never saw that."

I was lucky. This time.

Maybe I should take my own advice, land forward, nose in the corner, and not worry about being so accommodating....

TBT, The Beginnings of HEMS

From a friend of Flight Nurse Jeanne Foulds... 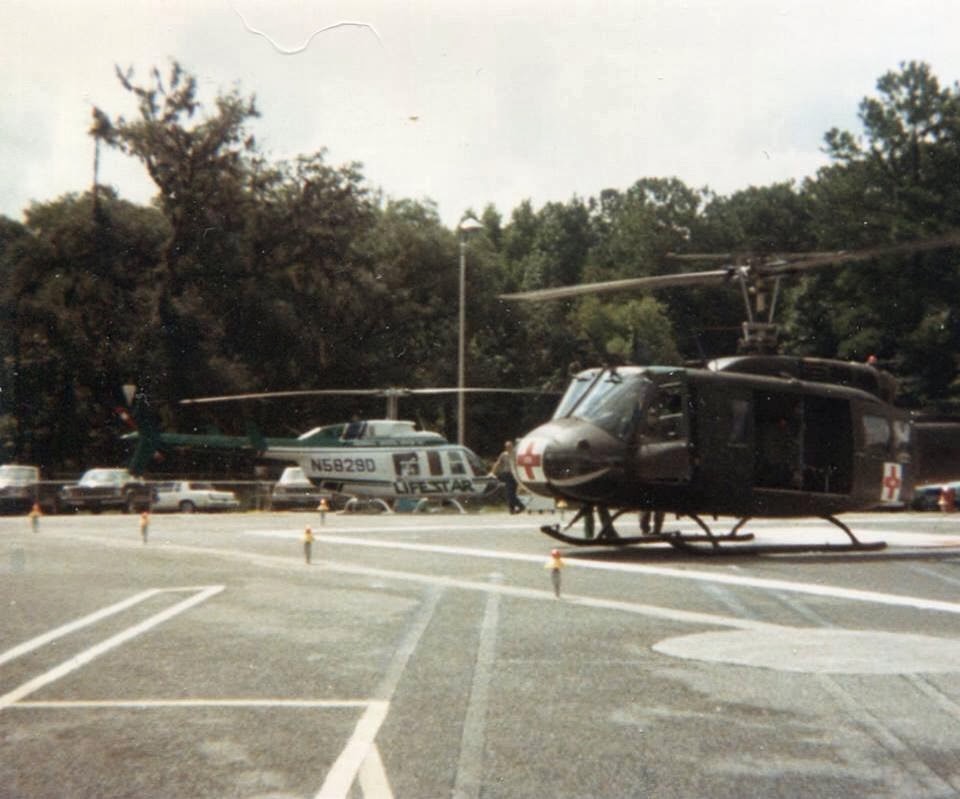 "MAST=Military Assistance to Safety and Traffic. I flew on those BEFORE Lifestar existed. Dr Boyd formed the Trauma Transport Team in 1982, and we used MAST helicopters, UH-1s out of Ft. Stewart. The smaller aircraft is the original Lifestar ship (a Bell LongRanger, or 206L) from when the program became operational on July 1st, 1985. It was replaced by the BK in 1987."

courtesy of David Winnette and Cari Hamelink.
No comments: