OMAHA — Three families will receive $18.4 million to settle their lawsuits over a 2002 medical helicopter crash in Norfolk that killed three people aboard. 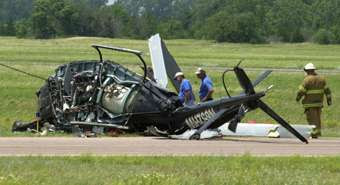 We can learn from our history, or we can repeat it... Do you remember this crash?

Read the report and ask yourself, "what would I do differently if I had been in this pilot's seat?"

From the NTSB report...
"The helicopter impacted the terrain following a loss of control. Shortly after departing the hospital on a medivac flight, the pilot requested that company dispatch have the company mechanic meet him at a nearby airport because he was experiencing "binding in the right pedal."
An airport employee stated that just prior to the accident, she saw the helicopter hovering over the ramp and thought it was going to land.

The guarded hydraulic cut-off switch was found in the off position.
Records show the pilot had approximately 2,500 hours of helicopter time with a total of 43.8 hours of flight time in this make and model of helicopter. Winds at the time of the accident were from 200 degrees at 16 knots, gusting to 21 knots.

The Federal Aviation Administration Rotorcraft Flying Handbook states that a loss of tail rotor effectiveness "may occur in all single-rotor helicopters at airspeeds less then 30 knots. It is the result of the tail rotor not proving adequate thrust to maintain directional control, and is usually caused be either certain wind azimuths (directions) while hovering, or by an insufficient tail rotor thrust for a given power setting at high altitudes."

(Editor's note, While the inclusion of this bit of information by the NTSB isn't technically erroneous, it indicates that they did not fully understand the causes of this crash, and simply listed things that may have been a factor. As it turns out, the tail-rotor on the Astar has tremendous authority, is on a long arm (the tail boom), and few pilots have ever mentioned LTE in the same sentence with the name Astar)

The National Transportation Safety Board determines the probable cause(s) of this accident as follows:
A loss of tail rotor effectiveness and the pilot's failure to maintain control of the helicopter. Factors associated with the accident were the binding of the tail rotor pitch changed rod, the gusty wind conditions, and the pilot’s lack of total experience in this make and model of helicopter.

We humbly suggest that the problem was not a lack of technical proficiency. The problem seems to have been the choices this pilot made. The problem was judgment or the lack of it.
Because there was no voice-recorder on board, we don't know when the pilot first became aware of a flight control problem. Was it as he came up to a hover off the pad? Was it on climb out? Was it in cruise flight?

This pilot apparently was thinking about other things besides landing right now. It appears he was attempting to be a "team player" by requesting a technician to meet him at the airport. But what if he could have simply performed a precautionary landing at the first sign of trouble? When faced with a problem in flight, we will be better served by landing and sorting things out on the ground.
To include "how will maintenance find us?" Years after this event a pilot flew an Astar for 15 or 20 minutes with the red oil pressure light on. And then crashed.

When something is wrong - LAND. Better to over-react than under-react.
Maybe this pilot was worried about hovering with limited ability to control the tail rotor. And maybe that is why he headed to an airport. But if that was the case, shouldn't he have performed a run-on landing? Or a slow shallow approach? Or an autorotation? To the runway? Isn't that what we do when we lose tail rotor control? (depending on problem and rotorcraft EP...)
Maybe he didn't think his problem was a big deal. But then it was. It is unlikely that he took off with the hydraulic cutoff switch off, more likely that he was attempting to sort out a problem while flying. Instead of landing...

If you encounter a situation like this while flying; as soon as you get the aircraft to a state where you can control it, stop making changes to aircraft configuration and land. And if you have to run it on, do it. Don't hesitate to ask for help and execute the the most conservative response.
(while complying with the rotorcraft flight manual emergency procedure and company guidance...)

Disclaimer - This post is not intended to open old wounds or cause pain or discomfort to the families of those involved. The sole reason for these discussions is to learn, so that no one repeats this tragedy. If there is any good to come from a crash, it is that we learn how never to do that again. We also know that luck plays a part in any crew's life, and that on any given day it may be our turn to measure up - or not.

You can read more about this crash by clicking here.
1 comment: