The question of the day...

Is it a light tossing? Significant slams? Occasional loss of control? Are you more concerned with turbulence at altitude or near the surface? How much wind will you tolerate near mountainous terrain or large buildings?

"The medevac helicopter lifted off the hospital's rooftop helipad at night. The pilot made a right pedal turn to the northwest, facing a building that extended above the height of the helipad by approximately 10-feet. The paramedic said that when the helicopter was about 20-feet above the helipad, and while he was programming the GPS receiver, a "sudden gust" of wind push the helicopter from directly behind. He was not alerted to anything unusual until he looked up and noticed the helicopter's close proximity to a 16-floor brick building, located at the northern corner of the heliport, which extended above the height of the helipad by 4 floors. The paramedic yelled, "building, building, building!" to alert the pilot. The pilot then made a rapid right cyclic input to avoid hitting the building, but the helicopter struck the building and fell about 13 floors to ground level. The paramedic did not see or hear any warning lights, horns or unusual noises, and was not aware of any mechanical problems with the helicopter. A police officer who flew two missions in the local area prior to the accident said the wind speed at 500 feet agl was at least 25 knots and gusting from the south/southwest. He stood on the primary helipad after the accident and said mechanical turbulence from the building was evident. An FAA inspector who also stood on the rooftop helipad after the accident said the wind gusts were about 20-30 knots from the southwest and they swirled around the heliport. Review of the helicopter flight manual revealed, "Directional controllability during take-off and landing is assured for flight condition with crosswind components up to 17 [knots]." (added - do you know the conditions under which that number was derived?)


Here's another bit from a later event,

On March 6, 2015, at 2310 central standard time, an Airbus Helicopters (Eurocopter) EC-130-B4 ... struck the edge of a hospital building and impacted its parking lot during a visual approach to the St Louis University Hospital elevated rooftop helipad (MO55), St Louis, Missouri. During the approach, the helicopter experienced a loss of directional control and entered an uncontrolled descent. The helicopter was destroyed by impact forces and a post-crash fire. The commercial pilot, who was the sole occupant, sustained fatal injuries. The helicopter was operated under Title 14 CFR Part 91 as an air medical positioning flight that was operating on a company flight plan. Night visual meteorological conditions prevailed at the time of the accident. The flight was returning to MO55 after it had been refueled at the operator’s base in St. Louis, Missouri.

The flight’s first approach and landing at MO55 was to drop off a medic, nurse, and a patient. During the approach, the pilot reported to the flight nurse and medic that winds were gusting to 25 knots. The flight nurse stated that helicopter was yawing quite a bit and there was a noticeable roll side to side during landing. The helicopter landed without incident during the first approach and landing. The flight then departed to obtain fuel at the operator’s base and then departed to return to MO55, to pick up the medic and flight nurse.The accident occurred during the return’s approach for landing at MO55.

And here is yet another comment in the media regarding a crash for which the investigation is ongoing.

"More than 20 first responders had to hike to the downed helicopter from an area only accessible with certain vehicles. Emergency crews then had to wait for strong winds to quiet before they could lift passengers out of the canyon."
In this event, a bystander reported gusts to 50 miles per hour on the upper rim of the canyon.

Here is a bit of text from "Skybrary" on turbulence.

"Air moving over or around high ground may create turbulence in the lee of the terrain feature. This may produce violent and, for smaller aircraft, potentially uncontrollable effects resulting in pitch and/or roll to extreme positions"

Of course, we don't ever want to fly our helicopters into "uncontrollable" conditions. Do we? The question is; how close to uncontrollable should we get? The answer is not in the rotorcraft flight manual. The manufacturer wants to sell you an aircraft, not talk you out of it. The answer is also most-likely not coming from your company. They leave a decision like this up to you the pilot - and to a lesser extent the medical team. "Tribal knowledge" has been offered as guidance. Or perhaps we should ask ourselves "what would the other guys do?"

Here's the problem with that idea... What if the other guys are out flying because we are? What if we are all waiting for the first crew to say "stop!"

I humbly offer a bit of advice. If at any time you feel that turbulence is putting you at risk for loss of control and unplanned contact with an obstacle,...

"The pilot reported that he performed his approach into the wind. On short final he could feel periodic gusts of wind. The pilot executed the standard approach to the helipad and the helicopter encountered another gust that picked the helicopter's nose up as it was moving over the pad. He maneuvered the helicopter to center it over the pad when he heard a sound like "metal on metal as if the tail rotor had hit something a couple times." The pilot felt no initial feedback in the controls, he felt the helicopter yaw to the left, and the helicopter continued to yaw to the left with his full application of right pedal. He lowered the collective and rolled off the throttle to enter a hovering autorotation and attempted to land it as level as possible. The helicopter landed hard. The operator reported substantial ground damage occurred to the tail rotor gearbox and tail rotor blades and a review of images revealed damage to the tail boom. A nearby fence and light were reported to be damaged. The operator's accident report indicated that there were no mechanical malfunctions with the helicopter.

Probable Cause and Findings
The National Transportation Safety Board determines the probable cause(s) of this accident to be:

The pilot's failure to maintain clearance from the ground obstacle during the landing with gusting winds present."

Are you performing operations near an obstructed confined area or a perilous pinnacle? Are you getting your butt handed to you? 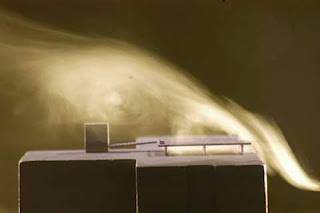 Go to a big flat airport with few obstacles and greater chances for stable flowing winds. That's where manufacturers test for controllability. Give yourself the same benefits that the test pilots get.
No comments: