Out of Sight But Never Out of Mind - Tail-Rotor Tales

I have to admit, Colin tried to warn me.

It was early 2004, and I was undergoing Bell 222 aircraft-transition and single-pilot instrument-flight-rules (SPIFR) training with Omniflight's chief pilot near Dallas, Texas. We were shooting approaches and mixing that with some traffic-pattern work and emergency-procedures training. While taking a break from the training, Colin had me get out and walk clear of the aircraft, then head backwards until I was abeam the tail rotor. The point he wanted to make was that the tail on a 222 is much longer and lower than the tail on the BK-117 that I was familiar with. Perhaps because I was tired, and concentrating on all the mistakes I was making during training, I didn't get his message - but he tried.

A few weeks later, shortly after dark, I was flying the Deuce into Richland Hospital's helipad for our contract-opening meet-and-greet. I had two or three other pilots on board, and there was a crowd of hospital-folks on hand; up against the building.  I completed my high recon, and set up for a landing to the west on the patient drop-off pad nearest the hospital, as another aircraft occupied the primary pad. 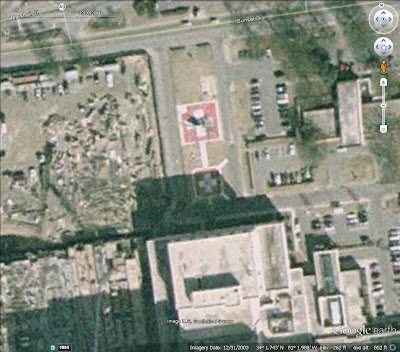 I was very conscious of being watched as I made my approach, and tried to be as smooth and deliberate as possible in an aircraft that was still  new to me.

Without even thinking about why, I concentrated on landing dead-center on the helipad, with my aircraft right on top of the "H."  I was completing the shutdown checks, and told the other guys they were clear to exit the aircraft. I sat there filling in the blanks on my forms when my door opened and one of the other pilots told me, "your tail is really close to a fence behind you, you need to shut it down!"  I said, "hold on, I am almost done." He said, "no Dan, it's really close!"

After shutting down, I got out and walked back to the rear of my aircraft, and my knees almost buckled. My stinger, the metal rod sticking out below the tail fin to protect the tail-rotor from a ground strike, was about 4 inches from a 3 foot high chain-link fence. I don't remember seeing the fence on the way in, and if I had drifted backwards on landing...

Mike Eastlee, a pilot working with the customer, played it off by saying, "it's no big deal, he landed on the H." But it was a big deal. I almost damaged an aircraft, and and could have hurt some people; and I was actually trying to be careful.

On July 2, 2009, about 2100 eastern daylight time, a Eurocopter AS 350 B2 helicopter, N53963, operated by Omniflight Helicopters Inc., was substantially damaged while landing at Loris Community Hospital Heliport (5SC5), Loris, South Carolina. The certificated commercial pilot and two clinicians were not injured. Night visual meteorological conditions prevailed and a company flight plan was filed for the medical positioning flight conducted under the provisions of 14 Code of Federal Regulations Part 91. The flight originated from Conway-Horry County Airport (HYW), Conway, South Carolina, at 2040.

According to the pilot, the purpose of the flight was to pick up a patient at 5SC5 for transport. The pilot initiated an approach to 5SC5, to the west, into the wind. As the helicopter approached the helipad, the clinicians were "call(ing)" clear of obstructions, such as trees and light poles. About 5 feet above the helipad, the helicopter shuttered and vibrated. The pilot continued the landing and performed an emergency engine shutdown.

A Federal Aviation Administration (FAA) inspector subsequently interviewed the pilot and clinicians. The FAA inspector stated that although all three persons had been to the heliport before, they simply forgot about several steel poles aligned adjacent to the helipad. Just prior to landing, the tailrotor struck one of the steel poles, and the helicopter came to rest on the helipad.

According to the operator's Vice President of Clinical Services, all clinicians are trained with the pilots in Air Medical Resource Management (AMRM). Through that training, the clinicians are taught to point out obstacles and hazards to flight.

The recorded weather at an airport approximately 15 miles northeast of the accident site, at 2058, included calm wind, clear skies, and visibility 10 miles.

The pilot had accumulated 2,587 total flight hours in rotorcraft, including 501 hours as pilot-in-command in the Eurocopter AS 350 B2 helicopters. The pilot logged 46, 19, and 2 flight hours in the previous 90, 30, and 1 days respectively.

Subsequent to the accident, the hospital removed the short steel poles adjacent to the helipad.

“The conclusion of the Pilot involved and the Company Chief Pilot was that the incident could have been averted if the landing to the landing zone had been made further into the landing zone (added: nose into a corner) as to prevent the tail rotor from impacting any obstruction in the vicinity of the edge of the landing zone. Initial and immediate action has been to indoctrinate all pilots flying into medium to small sized landing zones / heliports to position aircraft in such a manner to ensure that all components of the aircraft are clear of all hazards on the periphery and or confines/boundaries of marked landing zones/heliports rather than attempting to place the center of the aircraft at the center of the landing zone / heliport. Corporate wide reassessment of hazards at landing zones/heliports within each regions normal operating area is underway and will be added/updated as needed and posted as part of normal preflight briefings / risk assessments.”

I think the two main factors are a pilot's innate desire to be "squared away," (a human factor) and land perfectly on-center on a helipad, coupled with the fact that helicopter landing areas, or "helipads" come in so many shapes and sizes.

Here's another example... "He maneuvered the helicopter to center it over the pad..."

There are published guidelines for how to construct a helipad, and you have to look no further than the advisory circular at...

to learn all about what a helipad could look like, but in typical FAA fashion they have confused helicopter flight operations with commercial jet travel, and the airports they use and created a document and a set of standards that are, to put it tactfully, unwieldy.

The last time I checked, the only time the advisory circular must be complied with is when a helipad is completed using federal funds. Otherwise, anything goes. 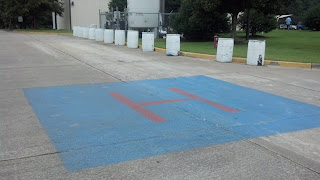 Now when a helipad is obviously an afterthought, it's much like landing at an accident scene, or "off-airport" in FAA-speak. I think these are actually less dangerous than those landing pads that have the look of legitimacy, and are almost correct. When landing on a road, one's senses are on high-alert, and trouble is expected. A hospital pad might be approached with a more relaxed attitude, or even complacency, because it's designed for the use of helicopters, right?

That was the case with Richland's. It looked legit, but the fence was so close to the pad that unless one landed a 222 diagonally, with the nose tucked well into a corner it was possible to make contact between helicopter and obstruction. That lesson was not lost on me...

As I was briefing this topic this morning, my nurse, an experienced fellow new to us from New York, commented that he would have never thought that landing to the H would present a problem. Okay, he's not a pilot, but a pilot might think the same way,

A while back some fellow quoted a line from an interesting bit of conventional wisdom, and because of my near-miss with my tail rotor it resonated with me.  The source was posted today on JustHelicopters.com. It is line number 2, for good reason. After rotor RPM, nothing is so important as a working tail rotor for continued success. I will leave the rest for your enjoyment... 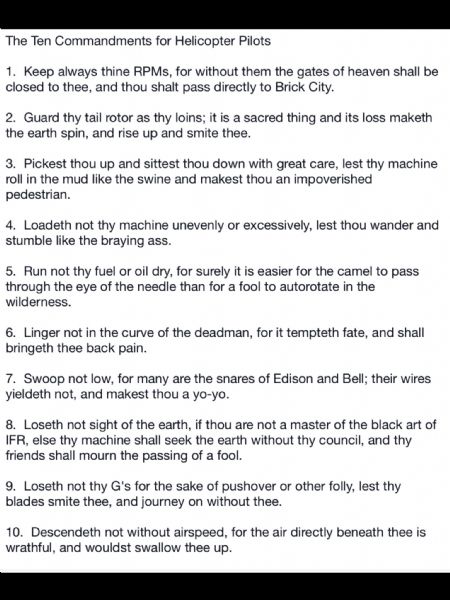 So having addressed the fact that people who have no idea about helipad design do so, and understanding that we should approach all hospital helipads as if the designer was trying to kill us; we might also say that in the case of an enclosed, or encumbered rectangle, we should land diagonally to provide the most room, nose-to-tail. That's not a hard fast rule, but it's something to consider...

During my time teaching Air Medical Resource Management for Omniflight, we had more than one tail rotor strike on or near the ground at an accident scene. And of course we tried to figure out how to stop suffering events like this;

The pilot said that upon landing at the scene he kept the helicopter operating with him at the controls, while the medical crew attended to the patient. After loading the patient into the helicopter, the paramedic did a walk around inspection, entered the helicopter, and called out the before-takeoff-checklist, while voicing an alert to the pilot concerning overhanging trees on the port side of the helicopter.

He said he heard the change in pitch to the sound of the helicopter's engine, and also saw the tail rotor begin a slight "wobbling." At this point the EMS technician said the helicopter was about 6 to 8 feet off the ground, and he believes that the pilot sensed that something was wrong with the helicopter, and set the helicopter down firmly on the curbside lane, facing west. An examination reveal no evidence of a preaccident mechanical failure or malfunction to the helicopter or any of its systems.

The simplest fix seemed to be asking pilots and crews to minimize manouvering while near the ground, ie. if you fly in and land safely, why not consider staying put, and when you leave, climb vertically until clear of obstacles. Every situation is different of course, but in any case moving around close to the ground is dangerous, and should be thoroughly briefed and understood by all involved - before moving... In the case above, it appears that the crew member attempted to advise the pilot of a nearby hazard, and the pilot acknowledged the advice - and then commenced to hit it. I am familiar with the event in question, and can tell you that they only had to slightly touch a small branch to remove a fist-sized chunk of the skin and core of one of  the tail rotor blades. This put the system out of balance, and the "wobbling" assembly was in the process of ripping itself off the tail fin as you might rip a beer can in half after drinking a few.

What are we to do? Like the man said, guard your tail rotor... It's back there out of sight, but it can never be out of mind.

All close-ground movements must be considered hazardous, and should be briefed in detail first.

A positive "three-way" communication between pilot and observer might go something like, "guys, I need to bring my nose right and my tail left. Can you clear my tail left?"

The response might be, "Yes sir, I can see to the left rear and your tail is clear" at which point the pilot would say, "nose right - tail left," and do it.

Conversely, we might hear,"No Dan, I cannot see to your left rear, or "you are not clear" and then we won't do that move.

When landing, and there is any question about the size and security of the area, stopping the aircraft at a safe hover altitude, and the pilot announcing, "I want to land here, does this look okay? Can you clear my sides and rear?" will help prevent striking an obstacle.

This may require clinicians to let the patient go for a few seconds, when one is on board, but in the scheme of things I think it's a fair trade-off...This is simple crew-coordination, and it's how we stay alive. 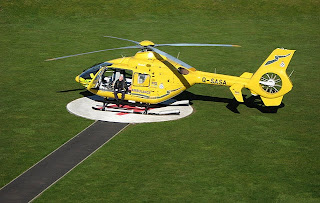