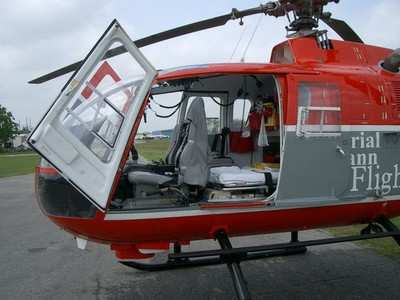 It was an absolutely beautiful day. The pilot, nurse, and paramedic were enroute in their progam's backup aircraft, a Bolkow BO-105. As they motored across the flat terrain near Houston, Texas, a new and different whining sound began to emanate from the machinery overhead. Bobby Wisdom, the pilot flying, looked over at the nurse sitting in the aft-facing co-pilot's seat and noticed that she was looking at him. She said, "what is that?"

"I don't know." But Bobby knew that the new sound wasn't good. His training took over and he immediately lowered the collective and began looking for a place to land. As he glanced across the nurse he saw a large field out her door. Then he swung his head to the right and found an even better option, a mall parking lot at three o'clock. He began a hard turn to the right, with the collective full-down. There was a loud bang. The caution panel lit up as if the test-button had been pressed. The panel was shaking violently making it hard to read the instruments.

In the turn, he wondered if he still had power from either engine, so he gently increased collective. The rotor bled down to 85% so he immediately returned the collective to the down-stop to save what rotor RPM he had. He thought the rotor RPM might come back up in the hard right turn, but it did not.

As Bobby rolled out on final, indications were that he had suffered a dual engine failure, and he had less than a full measure of stored rotor-energy to complete his autorotational landing. He adjusted the cyclic to avoid some light poles and then the woman appeared. Directly in his path, a mother pushed her baby carriage into the place he wanted to land.

Finally, stop it did.

Flames and smoke began to enter the cabin. Training took over. As all of us crew members know, the safest place to be in a helicopter that has just suffered an abnormal landing is inside. As bits and parts fly off, they tend to fly away from the aircraft. The unhinging can be extremely violent. The one caveat to the "stay inside until everything stops" mantra is that if it's burning - we better get out.

What we have to keep in mind at this point is that it would be a shame to live through the emergency landing and lose our head in the egress. Unfortunately, when we are scared to death, it's hard to keep anything in mind other than MOVE.

So Bobby's nurse opened her door, and exited the aircraft at a high rate of speed. She had her headset on, and as she was a few feet into her journey she came to the end of her cord, with a jerk. Off came the headset. As this was happening, the paramedic was "high-stepping" it to get away from the aircraft, Bobby's ingrained training and habit forced him to begin securing aircraft switches and controls. Then he realized that the aircraft was really burning... 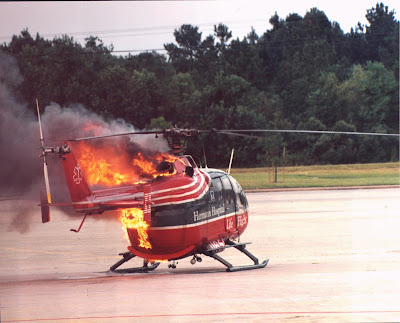 A passerby on the highway was returning from a picture-taking trip in Hooks, Texas. He saw the helicopter drop into the parking lot and begin to burn. He stopped, got out of his car, and used the last seven frames of film in this camera to capture these dramatic images. You can see the headset hanging down below the cop-pilot's door. 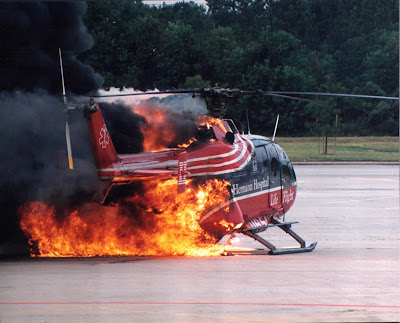 What started as a localized fire quickly turned into a fully involved blaze. This demonstrates why it is absolutely vital that when there is any indication of fire on your aircraft you land immediately. You don't have much time after the fire begins. 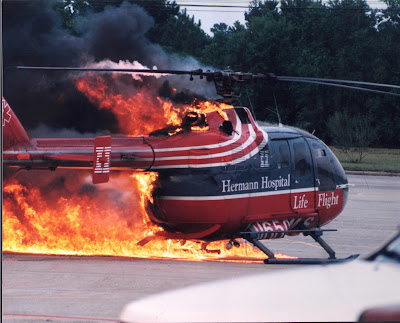 The investigation revealed that the main transmission had been serviced and cleaned with a compound designed to remove deposits from the interior surfaces and oil passages. Some of the cleaning compound remained in the passages after maintenance was complete, and served to block the flow of oil to the input-bearings, where the drive-shaft from one of the engines entered the transmission. The whining sound was the bearings seizing, and the drive shaft broke in two. "Bang." 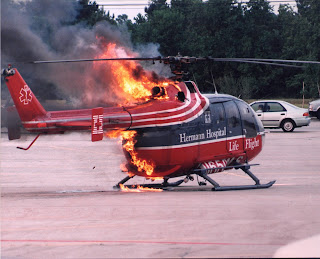 As the sheared shaft and it's boot flailed around inside the engine bay, fragments of debris crossed through the firewall and "fragged" the other engine. I wrote a fictional blog-post about this happening in a twin-engine helicopter in the clouds.

That fictional story is here..."What If?"


While two engines do offer us a large margin of redundancy, and increase safety, we still must keep in mind that one exploding engine can take out it's partner sitting right next door. We must be ready and proficient at autorotations; straight-in autos. autos with turn, low-level autos, and autos requiring maneuvering to avoid hazards and humans. The trend towards less rather than more autorotation training is going to mean more people will be hurt or killed after losing one or both engines. This reality is playing out in newspaper stories month after month.

Operators point to the costs of damaging aircraft in training, and the low probability of engine failure. That's all fine and good until it's your engine that quits. If you have been paying attention to the media reports, helicopter engines have been failing quite regularly lately. Maybe we should revisit how we prepare pilots for engine failures. And maybe us pilots should stop flying the helicopter as if the engine or engines will never quit.

When I was being briefed on this event, the program's director of operations told me he took this pilot out the very next day and they did autorotation training. He said, "you have to get right back to it or your thoughts will give you trouble." Real quality training is worth the money spent...

Mr. Bobby Wisdom, Memorial Hermann Lifeflight Pilot, was recognized widely following this event. He was selected to be the National EMS Pilot's Association's (NEMSPA's) Pilot of the Year in 1996. This was and is a distinct honor, congratulations sir, and thank you for decades of safe service.