Accident Review. What would you differently?

Lipperer, who grew up in the Jefferson area, became a pilot for UW Hospital and Clinics in 2000. He was employed by Air Methods, the company that leased the aircraft to the hospital. He was known for his flying skills, and colleagues felt safe getting into an aircraft with him, said Cisler, the hospital's director for emergency services.

"He was very thorough, very safety conscious, just smart at what he does," Cisler said.

Lipperer had worked for Air Methods since 1995 as both a mechanic and pilot, said Aaron Todd, the company's chief executive officer.

After transporting a patient to a local hospital and refueling at La Crosse Municipal Airport (LSE), the emergency medical services (EMS) helicopter departed LSE (elevation 656 feet mean sea level [msl]) about 2234 central daylight time (all times in this brief are central daylight time) on a return flight to its base heliport. Dark night visual meteorological conditions (VMC) prevailed at LSE. A ramp services employee at LSE who had observed the helicopter lift off and proceed east-southeast observed “moderate” rain and “fair” visibility at the time of takeoff. Witnesses located southeast of the airport reported hearing the helicopter in flight about the time of the accident, and one witness reported hearing a loud crashing sound. A search was initiated shortly after the crash but was hampered by the terrain and fog that had formed overnight. A search located the helicopter the following morning; the helicopter had impacted trees along a sparsely populated ridgeline about 5 miles southeast of LSE. The elevation of the ridgeline was approximately 1,164 feet msl, with 50- to 60-foot-tall trees in the area initially struck by the helicopter. 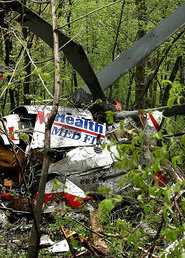 Distribution of the wreckage was consistent with the helicopter impacting the trees in a nearly level flight attitude under controlled flight. Examination of the helicopter’s engines revealed inlet debris, rotational scoring, and centrifugal turbine blade overload failures consistent with the engines being operated at a moderate to high power level (on both engines) at the time of impact. Nonvolatile memory downloaded from the digital engine control units (DECUs) indicated that both engines were in “flight mode” at the time of impact. Although the left engine main selector switch was observed in the “idle” position after the accident, the lack of anomalies related to the switch and the corresponding DECU in flight mode are consistent with the switch having been moved as a result of impact. No preimpact mechanical malfunctions of the helicopter were found.

The reported weather conditions at LSE about 2253 included VMC: calm winds, 8 miles visibility in light rain, few clouds at 1,400 feet above ground level (agl) [2,056 feet msl], overcast clouds at 5,000 feet agl (5,656 feet msl), temperature 10 degrees C, dew point 8 degrees C, and altimeter 29.70 inches of mercury. The preflight weather briefing obtained by the pilot about 1 hour before departure indicated VMC along the route of flight at the time of the briefing but forecasted deteriorating conditions later in the evening after about 2200, including possible instrument meteorological conditions (IMC). Search and rescue personnel reported fog and mist along the ridgeline overnight during the search operations. Additionally, an EMS pilot for another operator reported that when he departed LSE about 2 hours before the accident flight, fog was beginning to form on the west side of the Mississippi River and in the bluffs east of his flight route. He subsequently returned to LSE and declined at least one additional flight that evening due to deteriorating weather conditions. Because of the variability in weather conditions on the night of the accident, the investigation could not determine if the pilot encountered IMC at the time of the accident.

During preflight planning, the pilot should have identified any obstacles along the route of flight, including the tree-covered ridgeline. Company records indicated that the pilot had completed one prior flight to LSE within the previous 16-month period, which was about 2 months before the accident. To assist pilots, maximum elevation figures (MEF) are noted on sectional charts and are derived from such features as terrain, trees, and towers. An MEF is specified for each latitude/longitude quadrangle on the chart. Operation at or above the applicable MEF will ensure terrain and obstacle clearance. The MEF for the La Crosse area is 2,200 feet msl. In addition to the MEF, sectional charts depict terrain elevation and specific obstacle height information. If the accident pilot had observed the MEF of 2,200 feet msl, or the terrain elevation/obstacle height information, it would have provided clearance of the tree covered ridgeline. The elevation of the ridge in the vicinity of the tree strikes was approximately 1,164 feet msl. With the 50- to 60-foot-tall trees, the elevation of the treetops was about 1,224 feet msl, providing a margin of approximately 831 feet to the level of the reported “few clouds” and 4,431 feet to the overcast layer of clouds.

According to Air Methods Corporation, the accident pilot performed a formal flight risk assessment before the flight. Further, the flight was being tracked by a company flight-following program and received flight dispatch services before the start of the flight. According to the Air Methods General Operating Manual, the pilot’s risk assessment was to be recorded in the pilot’s daily flight log. However, the pilot’s daily flight log was destroyed during the crash. The pilot entered a risk assessment of “A” (normal operations) into the flight dispatch computer system before the flight. While the weather in the LSE area was marginal at the time of the accident, it was above the minimums required by Federal Aviation Administration (FAA) regulations and the operator’s procedures. There were no identified weather risks that would have warranted classifying the flight in the risk assessment category “B” (caution).