How to Avoid Running Into a Tower Without Really Trying

Just think about it.


As a self-check against "invulnerability," I roll memories of mistakes around in my head from time to time. This keeps me honest, and alive. When I think about tower-strikes, I remember a rainy, foggy night in the Midwest when I was the pilot-in-command of an MH-47 Chinook. I was in the lead aircraft, recovering to a military airfield in deteriorating weather under NVGs.

My copilot and I decided that we should get a clearance to fly on instruments, and fly an instrument approach to the airport; because conditions had deteriorated to the point that we could barely see the ground three hundred feet below us, and the view out front looked like the inside of a bright green ping-pong ball.

No sooner had we committed to instrument flight and begun a climb than the chip light for our number-two engine illuminated. The emergency procedure required me to shut down the engine; in the clouds while climbing. Luckily the engines on that aircraft were robust, and we could climb on one motor at several hundred feet a minute. As this was transpiring, I noticed a flashing light off the nose, penetrating the clouds, visible because it was red, and goggles respond well to red lights. In a few seconds we passed over the light, continued to climb, and in due time got a clearance and shot our approach.

This memory comes to me at night and makes me cringe. Because what I never even considered that night was that the flashing light I was seeing might not have been mounted on the top of the tower. If it hadn't been, I would not be writing this.

Towers have killed a lot of crews, in all sectors of the aviation industry. In one noteworthy example... 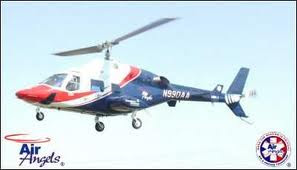 On October 15, 2008, at 2358 central daylight time, a Bell 222 helicopter, N992AA, operated by Air Angels Inc., and piloted by a commercial pilot, was destroyed when it impacted a radio station tower 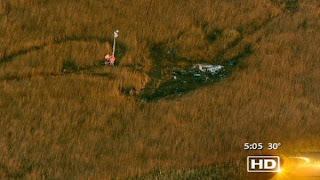 and the ground in Aurora, Illinois. The tower stood 734 feet above ground level. A post crash fire ensued. The emergency medical services (EMS) transport flight was conducted under 14 Code of Federal Regulations Part 135, and was en route from the Valley West Hospital Heliport (0LL7), Sandwich, Illinois, to the Children’s Memorial Hospital Heliport (40IS), Chicago, Illinois, when the accident occurred. Night visual meteorological conditions prevailed in the area of the accident site. All four occupants, including the pilot, a flight paramedic, a flight nurse, and the 14 month old patient, were fatally injured. The flight originated about 10 minutes prior to the accident....The helicopter had impacted the 734-foot tall radio station tower on its west side about 50 feet from the top of the tower

This accident occurred along a route of flight that this aircraft and this crew routinely traveled. The pilot had decades of experience flying, and should have known better. But us humans are subject to human factors, or human failings. They were motoring along, tending to a patient, perhaps considering what to do on their next day off, when something went bump in the night. It wasn't the first time for an EMS helo...

On April 25, 2000, at 1216 eastern daylight time, a Eurocopter BK117, N428MB, operating as Bayflite-3, collided with a radio transmission tower located on the Weedon Island State Preserve in St. Petersburg, Florida. The air medical flight, Bayflite-3, was operated by Rocky Mountain Helicopters under the provisions of Title 14 CFR Part 91 positioning flight with no flight plan filed. Visual weather conditions prevailed at the time of the accident. The medical evacuation helicopter was destroyed; the commercial pilot and his passengers were fatally injured. The local flight departed Bayfront Medical Center, in St. Petersburg, Florida, at 1212, and was en route to the Bayflite operations at St. Joseph Hospital in Tampa, Florida. 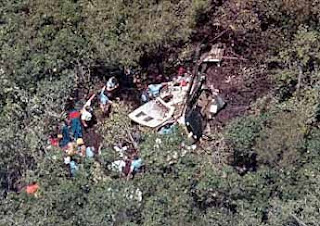 According to the operator, Bayflite-3 had completed a patient drop-off and was enroute to the Bayflite operation in Tampa, Florida. The operator also stated that the flight was flying a newly established route from the Bayfront Medical Center to St. Joseph Hospital. The new routing was in response to noise complaints from neighborhoods along the previously direct route. According to an eyewitness driving on San Martin Blvd., the helicopter was flying northeast at about 500 feet above the ground. As the eyewitness approached the radio transmission tower in the preserves, he noticed the helicopter as it collided with the radio transmission tower guy wire and the steel tower structure 480 feet above the ground. The helicopter continued several hundred feet northeast and crashed into a mangrove. 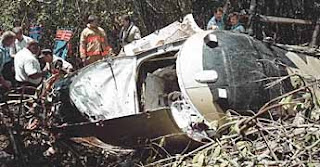 I had the chance to hear the Bayflight program director give a lecture on this crash a decade or so ago, and he described the pilot stopping by his office just prior to departing on the accident flight and mentioning that a new piece of avionics (aviation-electronics) had been installed in the aircraft. The crew was going to use it on the way home. One can imagine both the pilot and the medical crewmember sitting next to him attending to the new device, with no one looking outside as they approached the tower that killed them. This accident raised a lot of eyebrows, but didn't produce any rule changes. The 2008 crash however, did produce a new rule, which actually was nothing more than a formal statement requiring something that all pilots should do before any flight - determine how high they must fly to avoid striking something. Or, as an old fellow wrote...

This humorous anecdote was written into law with this change to HEMS/HAA-O requirements.

VFR Flight Planning: Prior to conducting VFR operations under these Operations Specifications, the
pilot must determine the minimum safe altitudes along the planned enroute phase of flight.
(1) The minimum safe cruise altitudes shall be determined by evaluating the terrain and obstacles
along the planned route of flight.
(2) The pilot must ensure that all terrain and obstacles along the route of flight, except for takeoff and
landing, are cleared vertically by no less than the following:
a. 300 feet for day operations
b. 500 feet for night operations...

A pilot should be familiar with the area of operations, and should KNOW about the bigger towers in the area. Indeed she should be talking about them, looking for them, and also looking for any new ones each time she flies. As common-sense and noise-abatement dictate that we fly at least a thousand feet above the ground, we are assured of clearing the vast majority of antenna's sticking up a few hundred feet.

We can and should know the location of the taller obstacles in our operating area. In unfamiliar terrain, the hand-held map (or nav-display) is key to situational awareness, and I don't mean just a glance during preflight while noting the highest obstacle. When the medical crew is not attending to a patient, they can be a big help with the task of finding towers on the map and pointing them out.

In the helicopter business, we should think about towers every step of the way. We should never assume that we are safe.

(Best Practice) When I am flying to an accident scene, and the destination's geographical coordinates change. The communication center relays these new numbers to me and I have to put my head down and re-enter the information into my GPS. So for twenty or thirty seconds I am not looking where I am flying. I announce "I'm inside." I expect a crewmember to state, "I'm outside."

Military aircraft hit towers too. Two friends of mine were conducting enemy-prisoner-of-war (EPW) transports upon the conclusion of the first Gulf War. The shooting was over. They began flying during the day, and absolutely expected to be finished before darkness, and were not. They had failed to bring their NVGs, and also failed to take note of the tower that they flew by several times that day, and they flew into it in the darkness. Perhaps they were lulled into a false sense of security by the relative emptiness of the desert and the fact that combat operations had ceased. 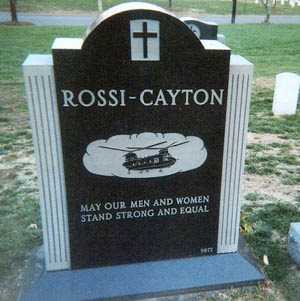 In another instance, two Warrant Officers assigned to my battalion were flying in southeast Georgia. Like me years earlier, they encountered instrument conditions while flying under visual flight rules (VFR). They talked about what to do and had decided to climb and get a clearance when they hit a tower.

A fifth soldier aboard the MH-47 Chinook helicopter survived, said Lisa Eichhorn, a spokeswoman for Fort Rucker, Ala., home to the Army helicopter training school where the soldiers were headed.

The survivor's condition was not immediately available.

As it flew past a television station's 1,000-foot-tall tower, it clipped a wire, said Deborah Owens, station manager of WFXL. 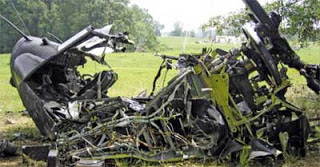 
We hit towers due to complacency, coupled with a lack of situational awareness. The S.A. chore is made much more difficult at night, and NVGs won't always help. Towers are sometimes illuminated with lights in the blue-green spectrum that NVGs don't respond to. So in that case, having someone looking where we are going unaided might save the night. Towers less than 200 hundred feet tall aren't even required to be lit, and they are EVERYWHERE.

This document might be something to discuss at your next briefing,

Next time your pilot is preparing to brief, ask him or her to print out the notices to airman for your area or state. When I do this in South Carolina, I usually find 4 to 6 pages of unlit towers listed in the 300 to 700 foot tall range, with a couple of monsters listed as well. I mention the ones above 1000 feet tall, and hold up the pages to make an impression - there are a lot of unlit towers, and when we descend for landing at a scene we are heading into the danger zone. A friend of mine in Charleston SC flew right by a tower on final approach one evening - it was undetected until it went by the window. Going slow, with every possible light on and positioned for all aboard to have a chance to see a hazard, and most importantly expecting the unexpected will increase chances for survival.

In 2004, I transferred from Savannah, Georgia to a flight program in Columbia SC. When I got there, the crews passed on a story about a PHI pilot who had flown near the WIS-TV antennas one night at about one thousand feet. He was talking about how tall the towers are (around 2000 feet up), and how it was a good thing they are so well lit.  At that instant, the one that wasn't lit passed by the side window, just outside the rotor disk. They said that after he landed, he got out and threw up.

Just think about it.