This is what the aftermath of VRS looks like... 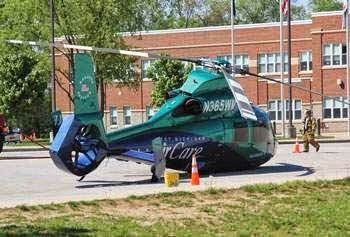 
NTSB investigators used data provided by various entities, including, but not limited to, the Federal Aviation Administration and/or the operator and did not travel in support of this investigation to prepare this aircraft accident report.

The pilot reported that he positioned the helicopter to land on a westerly heading with the light and variable wind from the west. About 200 feet above the ground he noticed that the helicopter was descending so he increased the collective to arrest the rate of descent. The torque gage was increasing from 50% to 60%. He lowered the collective in attempt to get into clean air and then pulled back on the cyclic to arrest the forward airspeed. The pilot attempted to control the helicopter to the ground, maintain an upright attitude, and avoid obstacles. The helicopter landed hard and bounced once before it came to rest in the parking lot. The pilot reported no preaccident mechanical malfunctions or failures with the helicopter that would have precluded normal operation. A video of the accident sequence was reviewed and matched the pilot's statement. The video did not reveal any anomalies with the helicopter or the engine sounds. A postaccident examination revealed substantial damage to the right fuselage and lower right vertical stabilizer. The video evidence and pilot statement are consistent with the helicopter entering a vortex ring state (settling with power) condition, which allowed the helicopter to descend more rapidly than expected and land hard. The National Transportation Safety Board determines the probable cause(s) of this accident to be:
The pilot's loss of control while entering a vortex ring state (settling with power) condition, which resulted in a hard landing.