I attended two educational sessions presented by Dr. Ira Blumen while attending the recent Air Medical Transport Conference in Long Beach, California. I have heard Dr. Blumen's name mentioned over the years as an authority why HEMS helicopters crash. I confess to wondering why there aren't more helicopter pilots answering these questions - why are we asking doctors how to fix HEMS, why aren't we asking pilots?

After meeting him and gaining some insight into his work on our behalf, I realize that my thoughts were wrong-headed. Dr. Blumen, joined by a team of HEMS professionals from all over the country and representing multiple disciplines, set about the most comprehensive project yet to determine why we crash HEMS helos, and what we should do to stop crashing them.

Dr. Blumen's recommendations are evidence-based, and go beyond the National Transportation Safety Board's work. Indeed, the completed NTSB reports served as a point of departure for the team's investigations into every crash between 1998 and 2009, 140 separate investigations...

But the team didn't just read the NTSB final reports, they read the entire "docket" (the entire file of every bit of information relative to a crash). This represented a tremendous amount of work, performed by volunteers. NEMSPA was represented by Bill Winn - thanks Bill for this service.

What did they find? Sometimes the NTSB gets it wrong. The NTSB doesn't fully understand what we do in HEMS and how we do it.. They do good work with what they have - but Dr. Blumen's team dug deeper and gained further insights.

I located a pdf of an earlier powerpoint on Dr. Blumen's work. Click here to view.

The first of Ira's presentations recapped the team's research work, "The Opportunity for Safety Improvement in Helicopter EMS." The next was titled "The Wizard of Odds."  His second presentation was coincidentally scheduled to follow mine in the same room.

As I was spending time with my group, Ira was sitting on the floor behind the rows of chairs, laptop open, reviewing or tweaking his presentation I think. It reminded me of nights in the 160th, prepping and briefing missions - with work going on until the time-hack. I was struck by the fact that a mere-pilot was in the same room with an acknowledged industry expert. Ira and I both want the same thing - to prevent the next crash. The experience was collegial.

Are you a pilot? There should be more pilot's speaking at AMTC. Why not you? You can increase your knowledge - for the surest way to learn more about anything is to teach a class on it - and you can elevate all of us pilots in the eyes of our partners in HEMS. Presenters get a free pass to the conference and a free room-night in the show hotels. AMTC is in Charlotte next year and you can submit a presentation idea through early December...

Ira dispelled some myths. Do you think that flying on the backside of the clock - at night - is significantly more dangerous? I did. It's not. I have been putting out the information gleaned from various sources, and it turns out those sources are frequently wrong. We all know the joke about things on the internet, but it turns out things being published in the media are wrong too.

Even the FAA get's things wrong. In their fact sheet to accompany the new HAA rules, they note that there are approximately 1515 (ems) helicopters being operated in the United States. This isn't what Dr. Blumen found, his number was closer to 900.

Flying HEMS is not 6,000 per cent more dangerous than other types of flying as was published in the media. For the patient, the HEMS flight is the least risky part of the health-care experience. When they go into the hospital, that's when things get "real." In 2008 flying HEMS may have been the second most dangerous occupation behind commercial fishing. Not so anymore. We have made real safety improvements in HEMS - the numbers don't lie. The 40% probability of being killed in HEMS over a 20 year career as was noted in a medical publication is simply wrong.

We still have a way to go and both Ira and I think that AMRM is the answer. It's number one on his list of "fixes." 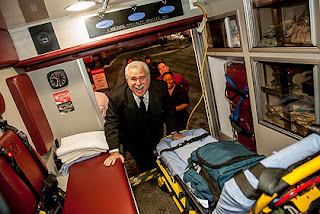 Dr. Ira Blumen is very gracious, and funny, and wickedly smart. He has been in movies and TV shows. His program, UCAN, uses flying doctors. So he has been there and done what we do. He is our friend, and we are lucky to have him in HEMS. I look forward to sitting in more of his presentations, and hopefully you will be there with me.