It is a good thing to learn caution from the misfortunes of others.
— Publilius Syrus 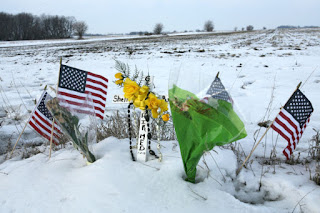 "It was a cold night in the dead of winter when Billy Wynne lifted off the helipad responding to a cardiac arrest call in the neighboring city of Watonga. Billy called his wife and told her he loved her. She was pregnant with their second child. It was February 22nd, 2013. Sitting next to Billy was 41 year-old nurse Chris Denning. In front of Chris was veteran pilot Mark Montgomery. In 60 seconds, both of these men would be dead.

The EagleMed had just reached its cruising altitude of 500 feet when the helicopter began to shake violently. It became instantly apparent this was not turbulence when the pilot began muttering, “don’t do this…don’t do this to me now.”

The engine died immediately. The helicopter began to fall.
It would take 10 seconds for the helicopter to impact the ground. In those precious seconds, the pilot searched for a place to land the helicopter. They spotted a tiny street below, only a quarter mile long, but it was lit on both sides.

Billy remembers the nurse, Chris, patting the pilot on the back saying, “You got this, Mark, you got this.” Billy recalled the look on Mark’s face: “Mark knew he was about to die.”

Billy remembered something Mark had told him about helicopters. No airborne machines are really made to crash, but helicopters definitely aren’t. The engine mount sits on top of the helicopter. The (fuel tank), full of jet fuel, rests below the helicopter in the belly."

Text copied from the Chive. Discuss this event with your flight team. What factors played into this crash - make a list.  What could have been done differently? Could this happen to your flight team at your base?