Employing Medical Personnel for Challenge and Response on checklists... 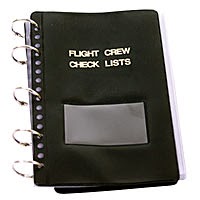 One of the biggest changes I experienced upon retiring from the military was the shift in attitudes about taking time to plan and execute flights. My unit had checklists for almost every activity, to avoid missing a detail or making a mistake.

So I stepped out of a Chinook and into a B-model 206 and went from 45 minutes to get the aircraft running and rolling to completing entire flights in that amount of time. In the civil world, time is money, time flies and so must we.

I was introduced to "Do -Verify" at Air Logistics. Or more honestly I was introduced to the concept of "the flow" or "the cockpit wipe-out" which means that pilots start the aircraft and perform systems checks from memory, then (supposedly) pick up the printed checklist and quickly scan it from top to bottom to ensure no items have been missed. In practice most single-pilots (especially those flying HEMS) dispense with the part about picking up the checklist and simply call off a few "confirmation-checks." The FAA forced these small checklists to be printed and affixed to the panel in my company's fleet - to make sure we don't do something dumb like launching with an engine at idle or fuel transfer pump switches off.

On 14 February 2014, the AAIB issued a Special Bulletin on the accident. It stated that the cause of the accident was that both engines had flamed out, but the reasons that they had done so had not yet been determined. The report stated that one of the two tanks supplying the engines was empty and the other contained 0.4 kilograms (0.88 lb) of fuel. A third tank, known as the main tank, was reported to contain 75 kilograms (165 lb) of fuel but the transfer pumps supplying this fuel to the two engine fuel tanks were found with their switches in the "off" position (excerpt from a report on a crash in Scotland - (Wikipedia)


We single-pilots flying HEMS are squeezed between slowing down and speeding up. If we take too much time to launch we have to answer questions. So uncommon is it for a HEMS pilot to refer to a checklist while running up an aircraft that some medical personnel who see this attribute the practice to a lack of experience.

In 2000 I volunteered to fill in at a base in Charleston SC for a sick pilot. I drove up from Savannah and found out that things there were different. One of their practices was to have the nurse or medic call off a before-takeoff checklist - with both critical aviation (fuel transfer pumps on?) and medical (do we have the drugs?) items included. I would start the BK and check the systems from memory, but before pulling up on the collective I would say, "before takeoff checklist please."

This system worked well, and prevented failures and disappointment.

I took this practice back to Savannah, and my base manager agreed that we could and should do it there. The Savannah team went one step further and had the crew call off  a before-landing checklist, which serves to let everyone know that landing is imminent and sterile cockpit is in effect. When a pilot from Savannah started a new base in Vidalia, he took the practice of the crew challenging and the pilot responding with him - it was what he was accustomed to after all. They never forgot their drugs or attempted take off with the fuel-flow lever out of the detent.

As a traveling relief-pilot, I can tell you that this custom is not wide-spread. And why not? Is it because some pilots want to keep medical personnel "out of the cockpit?" Are they required crew or passengers? Are we flying today or tonight under goggles? Aren't these distinctions dumb? If I can use you to keep me from screwing up I will and you will be crew.  Maybe we don't use medical personnel to call off checklists because we don't want to give the impression to customers or the Feds that we single-pilots need help? Maybe it's our egos?

I can tell you this - the biggest egos on the planet - the surgeons - now stand next to a patient and run a checklist including what part of the body they will cut on - before cutting commences. They do it, and they use staff to read the checklist. Medicine took checklists from aviation.

Maybe we should take them back.

If your program does not use a nurse or medic to call off a checklist, perhaps you might consider it. This would have prevented taking off with one engine at idle at more than one program. It would have prevented a BK-117 from crashing after it's supply tanks ran dry with full mains - because the pilot forgot to turn on the transfer pumps and turn off the instrument lights - he couldn't see the caution lights in daylight.

It's simple, it only takes a few seconds, and it employs a resource that is just sitting there. The medical CREW.