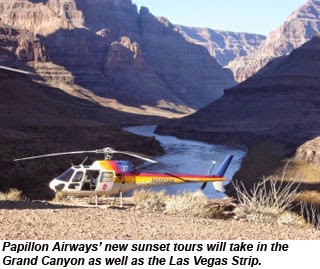 NTSB Identification: WPR14FA195
14 CFR Part 91: General Aviation
Accident occurred Sunday, May 18, 2014 in Peach Springs, AZ
Aircraft: AMERICAN EUROCOPTER CORP AS350B3, registration: N840PA
Injuries: 1 Fatal.
This is preliminary information, subject to change, and may contain errors. Any errors in this report will be corrected when the final report has been completed. NTSB investigators either traveled in support of this investigation or conducted a significant amount of investigative work without any travel, and used data obtained from various sources to prepare this aircraft accident report.
On May 18, 2014, about 1600 mountain standard time (MST), an American Eurocopter Corp, AS 350B3, N840PA, rolled over after landing at the Ramada landing site located at the bottom of the Grand Canyon near Grand Canyon West Airport (1G4), Peach Springs, Arizona. Papillon Airways Inc., DBA Grand Canyon Helicopters, was operating the helicopter under the provisions of 14 Code of Federal Regulations (CFR) Part 91. The commercial pilot with a certified flight instructor (CFI) certificate was fatally injured; the helicopter sustained substantial damage. The local repositioning flight departed 1G4, about 1555. Visual meteorological conditions prevailed, and a company flight plan had been filed.
The accident site was 1.75 nm east of 1G4, located at the bottom of the Grand Canyon, approximately 380 feet west of the Colorado River (west shore). The wreckage was found resting on its right side located at the subject landing pad.
Witnesses reported that the pilot landed and was planning on exiting the helicopter to perform a "fluid level check." After landing, the pilot exited the running helicopter; shortly thereafter the helicopter became airborne without the pilot at the flight controls. The helicopter subsequently impacted the ground and rolled over. The pilot was struck by one or more of the main rotor blades and was fatally injured.
The helicopter was examined on site by the investigation team. No abnormalities with the helicopter airframe or engine systems were noted. The helicopter was recovered for further examination.
The helicopter was equipped with an Appareo Vision 1000 cockpit imaging and flight data monitoring device. The Appareo device was undamaged and shipped to the NTSB Vehicle Recorders Laboratory in Washington, DC, for data extraction.
The helicopter was equipped with a 406-mhz Emergency Location Transmitter (ELT). The Armed Forces Rescue Coordination Center (AFRCC) received the ELT activation at 2300z (1600 hours mountain standard time.) The first activation did not have any latitude or longitude information. However, the second activation was received at 2329z, which was 29 minutes after the accident with lat/lon data that was 1,500 yards north of the accident site. The ELT did not assist in locating the accident site due to on scene witnesses.

I'm not going to judge you but leave you with these thoughts:
In your (and my) life, mistakes will be made. More times than not, those mistakes will go unnoticed and will be without consequences. We all say and do "stupid" things and usually get away with it. Sometimes, we get a bit unlucky and the wrong person hears it or the wrong conditions preside. Rather than judge the actions or in-actions of someone else, better to reflect on our own lives and learn from this mistake so that it doesn't happen to us or a loved one.
I find it strange that you find the need to judge someone or their actions. After all, we are all
fallible.

I realize lots of pilots, especially in utility get out with the rotors running.  Most of the time nothing occurs.  Tell that to this pilot.

It is just a stupid thing to do.  You are giving up your control of the aircraft. If anything went wrong, you would be unable to stop it.  Just shut the stupid thing off.
This case in particular is most shocking to me.  There is no easier, or faster helicopter to shut down and start up than the B3.  This guy died to save himself a 30 second cool down, followed by a 45 second startup.
Guarantee you that Pappilion no longer allows pilots to get out hot.  After this accident, none of you should be getting out hot.  Learn from his mistake.

So - What are YOUR views on exiting a running helicopter?  Comments welcome...