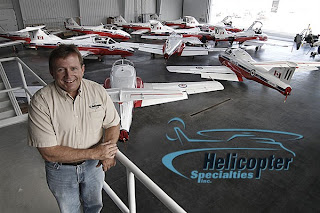 I had the good fortune to meet Jim Freeman several years ago in Birmingham, Alabama. He and I shared the responsibility to ferry a Bell 230 coming off of a contract up to his facility in Janesville, Wisconson. He was working for the aircraft's owner, I was picked as I had flown her on an EMS contract in Columbia South Carolina.

Old folks may remember that once upon a time, a wealthy fellow with a famous last name, Dan Parker (of the Parker Pen Company ) fell in love with helicopters and started a one-ship company in Janesville, and as he was willing to have his helicopter make money any way possible, he named the company "Omniflight."  (They began with the same type of aircraft in the picture, a Bell -47) 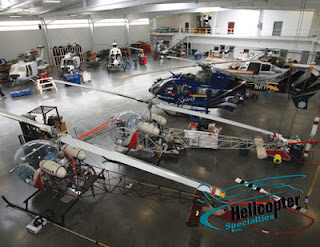 For years, Omniflight lived up to it's name, transporting executives and other VIPs, serving New York city with a shuttle, flying tours of the Wisconson Dells, and eventually testing the waters offshore with the acquisition of Pumpkin Helicopters, an oil and gas outfit. Omniflight eventually settled into helicopter EMS, and toward that end purchased Silver Star Helicopters based in Addison, Texas, near Dallas. After Dan Parker died, his widow elected to move the company from Janesville to Addison. This put Jimmy in a pickle, as he was from Janesville and didn't want to leave. He spent some time continuing with Omniflight as a flying mechanic, able to ferry backup aircraft all over the country, and fix them too. One day, he computed the hours worked versus the pay earned and realized that there had to be a better way. He began, as many aircraft mechanics do, working out of the back of his pickup truck. And made a living.

Then he got a call from an old friend. A customer needed a helicopter "completed," which entails the medical interior, the avionics suite, and the paint job. The established completion centers were booked up, and this friend knew of Jim's work ethic and capabilities. Jim contacted all the old Omniflight "wrenches" living in the area and had a Sunday night meeting at his house. The end result was a rented hangar at the airport, and a beautifully completed aircraft. From those humble beginnings, he and his team have created one of the finest helicopter maintenance, repair, overhaul, and completion centers in the world. His business has been profiled in magazines, and on TV, and they have all the work they can handle; for one reason - they do a good job. 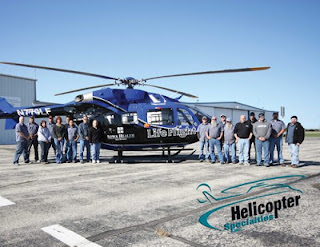 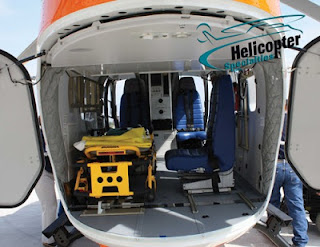 Jim and I flew the 230 from Birmingham to Janesville and got to know each other. He is a good pilot, and could have gone down that path, but for him the real pleasure is making helicopters look and perform like new. We stopped by the OSF flight program in Peoria on the way north to let them have a look at our machine as a parts spare, and finished the trip using the radar, the autopilot, and the air conditioner to good effect. I found it ironic that the machine had never worked so well as she did during the ride to get rid of her. 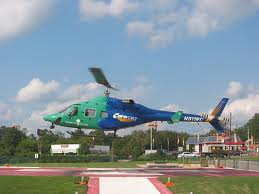 Many people living in America today think that our best days are behind us. When I get discouraged about the state of things, I think about Jim Freeman, Helicopter Specialties, and what one guy with a commitment to excellence can achieve...