Do You See Me?


This is preliminary information, subject to change, and may contain errors. Any errors in this report will be corrected when the final report has been completed. NTSB investigators may not have traveled in support of this investigation and used data provided by various sources to prepare this aircraft accident report.

According to the EC-130 pilot, he was inbound from the south, and planned to land on the airport location designated as "Spot 2," which was a dedicated helicopter arrival and departure location. He followed the company-designated arrival procedure, in which the helicopter flew a descending pattern first north along the centerline of taxiway A, and then west along the centerline of taxiway D to Spot 2. Spot 2 was a 50-foot painted square situated on the airport ramp. Taxiway D was 40 feet wide, was oriented approximately east-west, and comprised the southern perimeter of the same ramp. The center of Spot 2 was located about 50 feet north of the centerline of taxiway D. Since BVU was not equipped with an operating air traffic control tower, the pilot communicated his positions and intentions via radio transmissions on the BVU common traffic advisory frequency (CTAF). 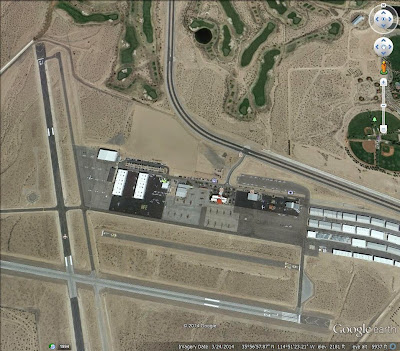 The helicopter pilot therefore continued his descent along the centerline of taxiway D towards Spot 2. About 8 to 10 seconds later, as the helicopter came almost abeam of Spot 2, the pilot began a right pedal turn to traverse to and set down on Spot 2. At the commencement of that pedal turn, the pilot simultaneously spotted the wings and nose of the airplane through his chin windows, and felt an" impact." He stopped the turn and descent, transitioned to Spot 2, descended, and landed on the ramp.

The flight crew of the airplane was unaware that there had been a collision, and they continued with their taxi-out and departure from BVU. The airplane was recalled to BVU by company personnel once they learned of the collision. The airplane was equipped with a cockpit voice recorder (CVR). Subsequent to the company's attempt to obtain a non-NTSB sanctioned readout of the CVR, the device was obtained by the NTSB, and sent to the NTSB recorders laboratory in Washington, DC for readout.

The helicopter pilot had recently been hired by Papillon, and the accident occurred on his first day "flying the line" for the operator. The captain of the airplane began his duty day at 0507 that morning, and the collision occurred during his sixth flight of the day.


A commenter writes: All you sky god's on here commenting like you haven't made a mistake.
I remember flying in the canyon with only a 1000 hours. I wonder how many times I landed and if a plane was under me I wouldn't have known. I wonder how many times the variables could have lined up during that moment my attention was some where else.
This guy is either incredibly unlucky, or incompetent. We don't know which it is. But if you have been flying long enough, your butt has been saved by nothing but pure dumb luck more than once, and you know it.
I have made some pretty bad decisions during my career. I do my best to learn from them and not make them twice. Some of those decision I made during the early portion of my career could have been really bad.
None of us are perfect. Every time we fly we take a risk, so let's stop picking this guy apart, learn what we can, and hopefully the next time a guy in another aircraft calls you in sight you don't trust him. That is what I am learning from this guy's mistake. Oh yeah, and look before you leap. (OR LAND)