Not It Could Happen but It Did Happen...

It turns out that it has happened more than once, and just as my fictional pilot "Dennis" successfully landed his machine, so did this real life professional.

To hear radio traffic from this incident click here.

(Palmetto-AP) -- The pilot of a medical helicopter says he heard
a loud bang just before one of his engines caught fire, forcing him
to make an emergency landing on a state highway.
Amund Moe, pilot of the B-K-1-17 helicopter from Bayfront
Medical Center, told hospital officials he also had trouble with
his second engine. He killed both engines and glided to a rough
landing on Interstate 2-75 in northern Manatee County last night.
Nobody was injured. The infant patient aboard, who was being
transported from Naples Community Hospital to All Children's
Medical Center, is in good condition today.
The Federal Aviation Administration is investigating. 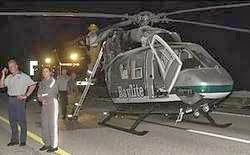 An infant patient and three crew members escape unharmed after the "hard landing''near the Skyway.

The pilot said that while in cruise flight at an altitude of 1,000 feet, a speed of about 130 knots, and about 60 percent torque, without warning he heard a loud explosion from the right side of the helicopter, with simultaneous No. 2 engine fire and failure warning lights and indications, along with severe vibrations. He said that the helicopter yawed several times from left to right and he heard a "whopping" sound. He also said that at the same time the No. 1 engine torque meter needle moving rapidly from about the 9 to 3 or 4 o'clock positions on the gauge. The investigation revealed two of the power turbine blades and four rear bearing support housing (RBSH) failed in overload. The hub had been displaced from the engine centerline, and a deflection had occurred at the engine case axial midpoint, along with a misalignment of the inlet housing and the rear bearing support housing (RBSH). The resultant damage to the gas producer (GP) system, was consistent with an assembly error and mechanical failure having occurred by the loss of critical internal operating clearances and radial support for the rotors. Continued engine operation as the failure progressed led to compressor surge and the emergence of combustion gases from the No. 2 engine inlet, which ignited inlet cowling material. The No. 1 engine ingested smoke and combustion by-products from the engine cowling fire which caused a temporary stall condition.
The National Transportation Safety Board determines the probable cause(s) of this incident to be:
Improper maintenance/installation of the No. 2 engine power turbine (PT) wheel assembly by company maintenance personnel, which resulted in deflection at the engine case axial midpoint and misalignment between the inlet housing and the rear bearing support housing (RBSH) which resulted in damage to the engine and an in-flight fire.

By TAMARA LUSH and LEANORA MINAI
© St. Petersburg Times
published August 27, 2002
A Bayflite helicopter carrying an infant patient caught fire over Tampa Bay late Monday and was forced to make an emergency landing near the Sunshine Skyway bridge in northwest Manatee County.
Neither the infant nor four crew members were injured when the helicopter made a "hard landing" about 8:35 p.m. on Interstate 275, between the south Skyway toll booth and U.S. 41.
Crew members jumped out of the helicopter and carried the infant to safety. A second Bayflite helicopter arrived about 20 minutes later and transported the child and two crew members to Bayfront Medical Center in St. Petersburg.
"When the helicopter landed it was engulfed in flames," said Gerald Pochodaj, who was driving toward the Skyway when he saw what he thought was a low-flying airplane.
Pochodaj said crew members carried the baby and incubator to safety as flames shot from the right engine.
"These Bayflite folks are the best at what they do," said Bill Hervey, manager of public relations for Bayfront. "They save lives every day. The patient wasn't hurt, the crew wasn't hurt, it was perfect."
The names of baby and the crew members were not released late Monday.
Hervey said Bayflite 3 was 50 minutes into its trip, transporting the infant from Naples Community Hospital to Bayfront, when the warning lights went on, signaling an engine problem.
Another witness saw a small ball of fire near the helicopter as it crossed the bay. One of his children said, "the helicopter . . . it's on fire!"
"You could see a good-sized ball of fire," said Danny Ward, 40, of Bradenton, who was in Rubonia at his sister's house.
He said it was headed toward St. Petersburg and then banked sharply and landed. He said he assumed it did not crash because they didn't hear or see anything.
"That was a good pilot," Ward said.
Pochodaj, an engineer at Transworld Diversified Engineering in Tampa, said the pilot told him that dash lights lit up, the helicopter filled with smoke and they knew they had to land. He called the rescue of the baby heroic.
"Their instinct was to do their job," said Pochodaj, 36.
After the baby and some crew members were picked up, a third helicopter retrieved the remaining crew members.
"Everybody's safe," said Cassandra Morell, Bayfront Medical Center spokeswoman.
The Federal Aviation Administration will investigate why the twin-engine BK-117 developed engine trouble and was forced to make an emergency landing, said Kathleen Bergen, FAA spokeswoman.
"I understand there may have been an engine fire," she said. "Were there mechanical problems? Operational problems?"
A Bayflite maintenance crew dismantled the craft's rotor blades to make it easier to transport. The green and silver helicopter, its right engine charred, was being moved late Monday to a Sarasota airport, home of their Bayflite 2 base, on a flatbed truck.
Hervey, of Bayfront, said the pilot and copter are from Rocky Mountain Helicopter out of Provo, Utah. They contract out staff and equipment, he said.
Such pilots have to have a minimum of 2,000 flight hours to do this kind of work, said Hervey, adding that representatives from Rocky Mountain are coming here to assess the damage.
The hospital routinely has four aircraft in service but keeps a backup, which will immediately go into service.
The last Bayflite helicopter crash was on April 25, 2000, when the medical helicopter hit a radio tower near the Gandy Bridge, killing all three crew members.