Keeping It All Together After A Mid-Air Collision With A Bird...

"Those articles that you think are secured in your cabin? They aren't..."


I met a paramedic yesterday who experienced a mid-air collision with a vulture last October. I hesitate to use the term "bird strike" for this event because it does not convey the shock, the destructive force, or the near-death experience that this crew member and his team lived through.

There were climbing on a beautiful day, when the medic, sitting left rear,  noticed a large dark shape diving from above and in front of the aircraft. He tried to utter a warning, but it happened too quickly... 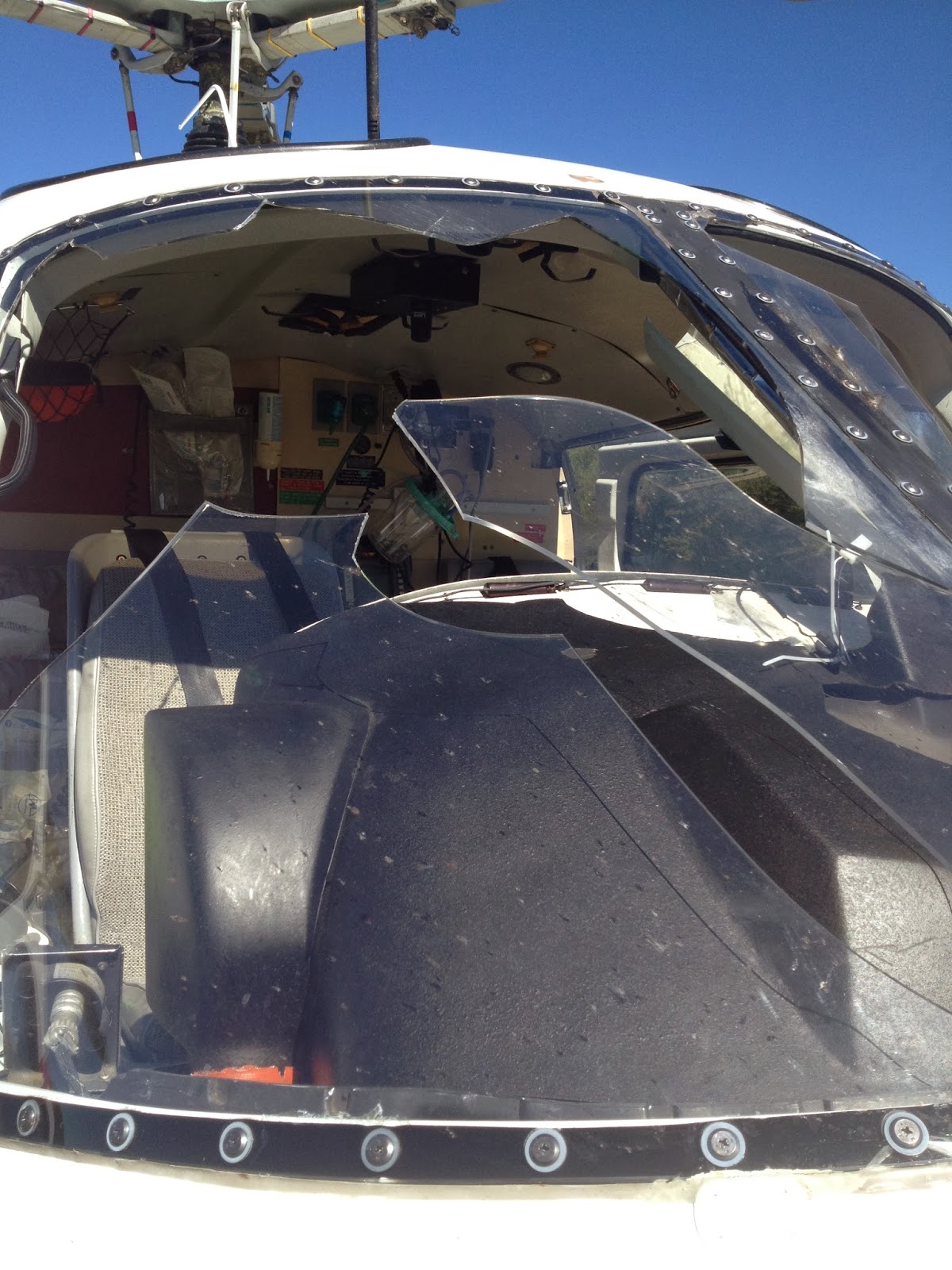 
Both windscreens failed, and gaping holes appeared where the plastic blew into the cabin. The incredible over-pressurization of the cabin instantly blew the doors open. The pilot's head rolled back onto his neck, he was stunned and "unconscious" for a moment. The aircraft began to dive towards the earth.

Articles that were supposedly "secured" in the cabin began to blow out the spaces formed by the doors exploding open. The noise was unimaginable. The wind was whipping the aircraft into a frenzy of blowing debris and blood from the pilots face was in the air. 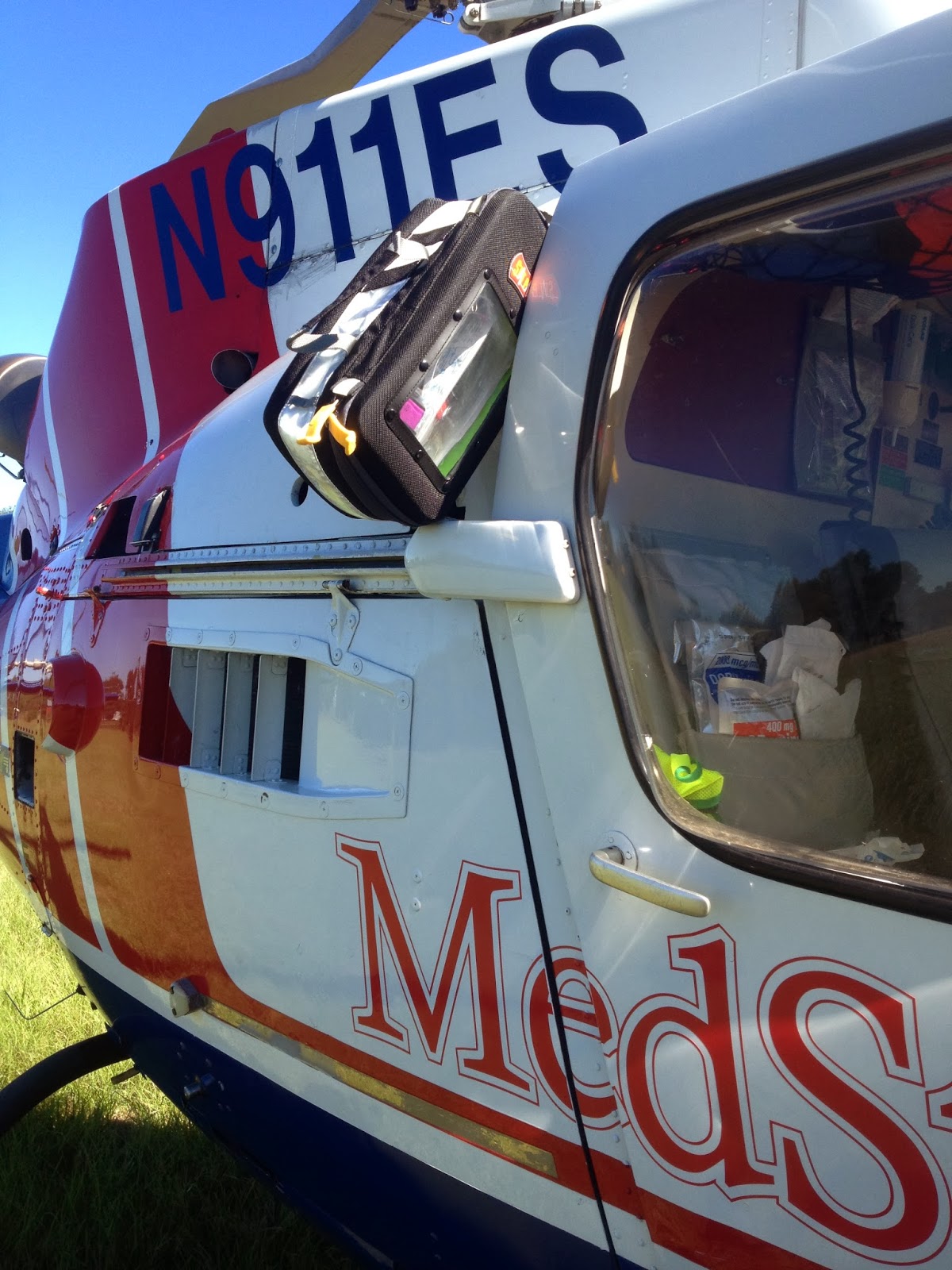 The medic, in the left rear seat, fearing that his door was going to depart the aircraft and strike the tail rotor grabbed hold and pulled until his hand bled. He was struck in the visor by a piece of the aircrafts dash, if his visor had been up it would have struck him in the eye. (Visors down in flight whenever possible!)

The pilot woke up and used his fingers to pry an eyelid open, to see through the blood and wind. He regained control and landed the aircraft... 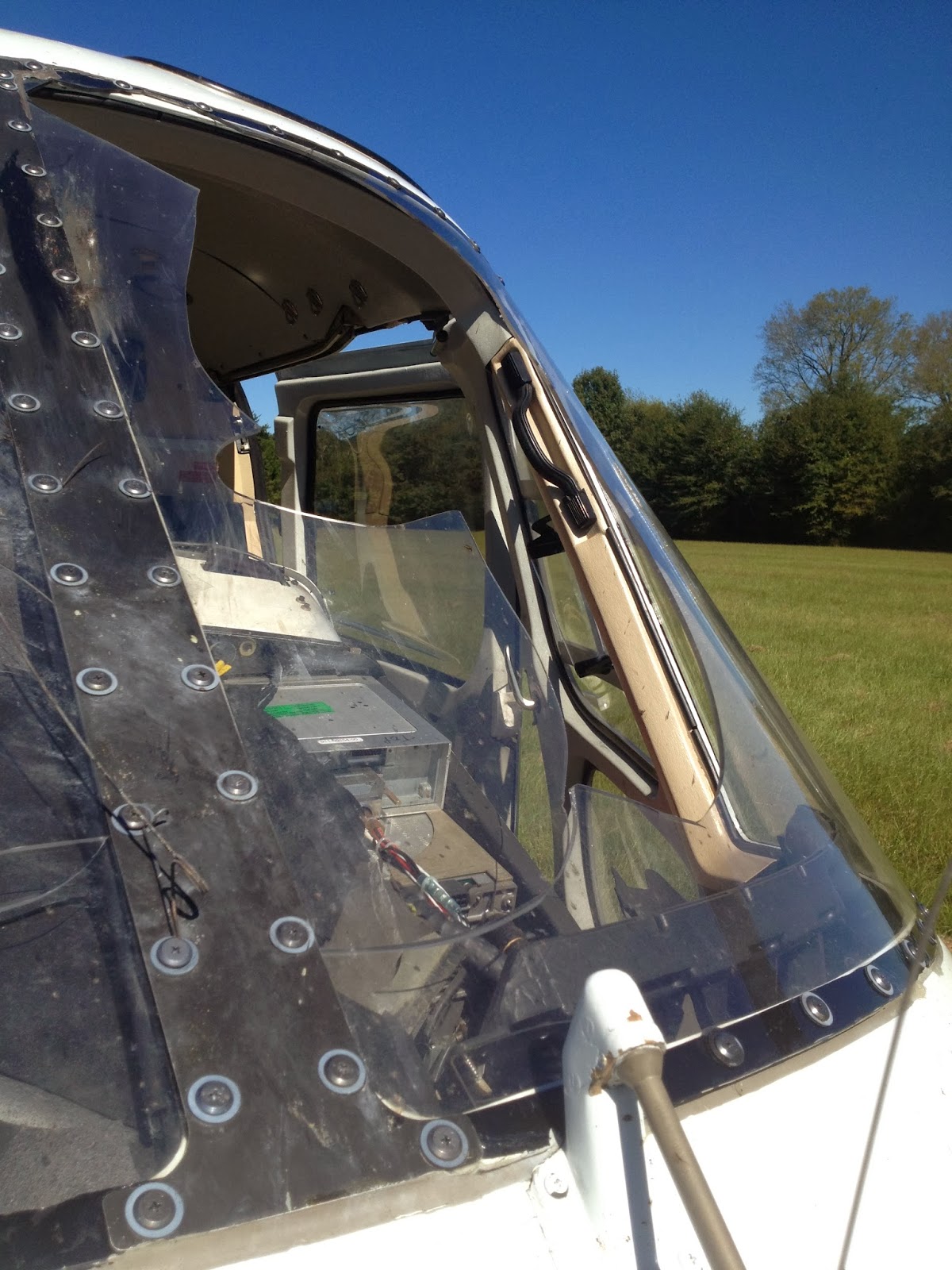 The bird never entered the aircraft, but he almost took it down. The medic's quick thinking likely averted the door leaving the aircraft toward the tail rotor. I vote they give the pilot an award for not losing control of himself and regaining control of the aircraft. He was measured and measured up... May we all in extremis

Thank goodness the fuel flow control lever was on the floor, away from the action - otherwise it might have been knocked back to idle or off which would have made the ride much more thrilling... 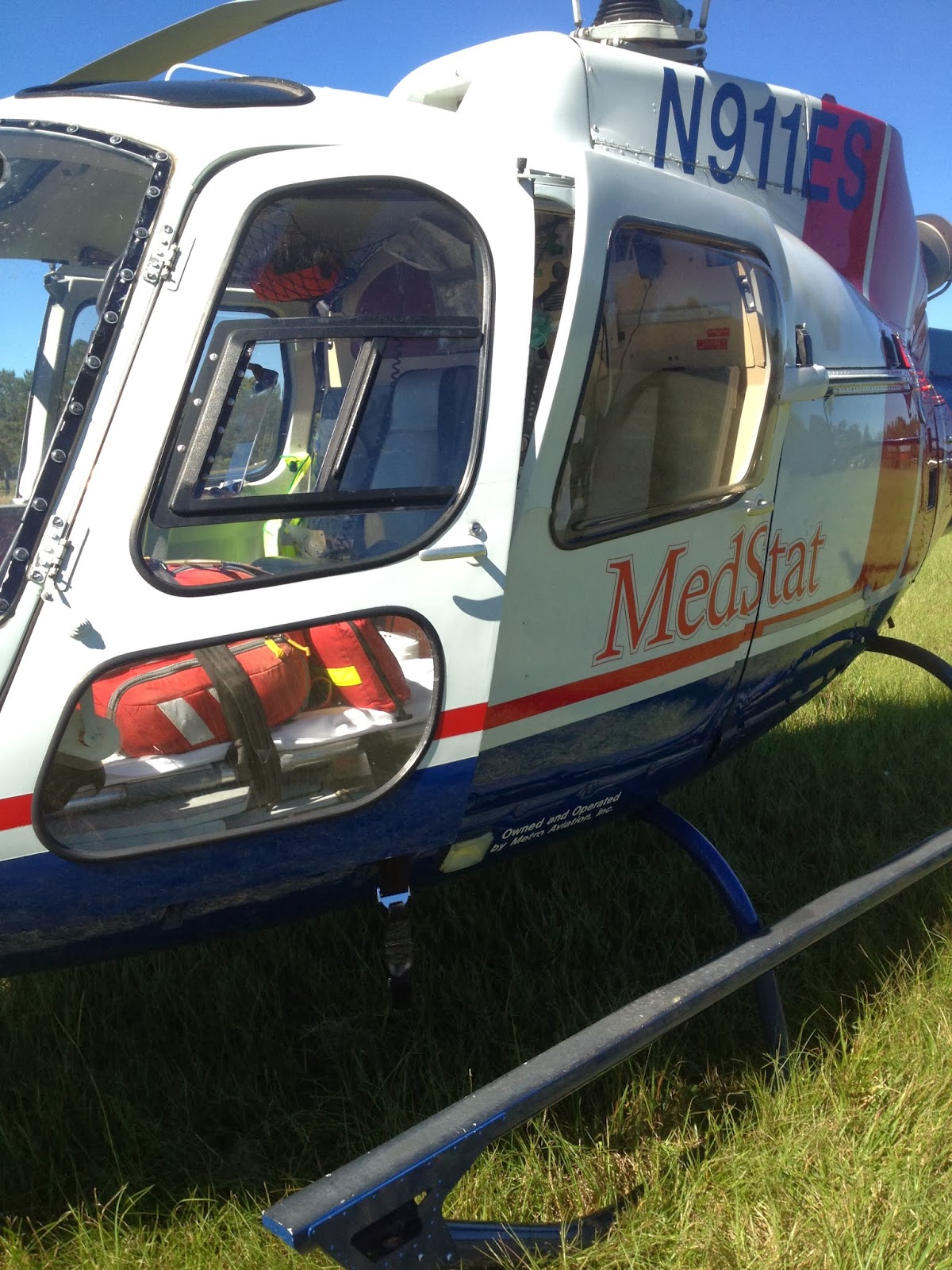 I wrote another post about bird strikes recently, using research, but it is much more compelling to hear the words from the man who lived it. You can still see it in his eyes when he talks about it. He said, "those articles that you think are secured in your cabin? They aren't..." He knows from experience. 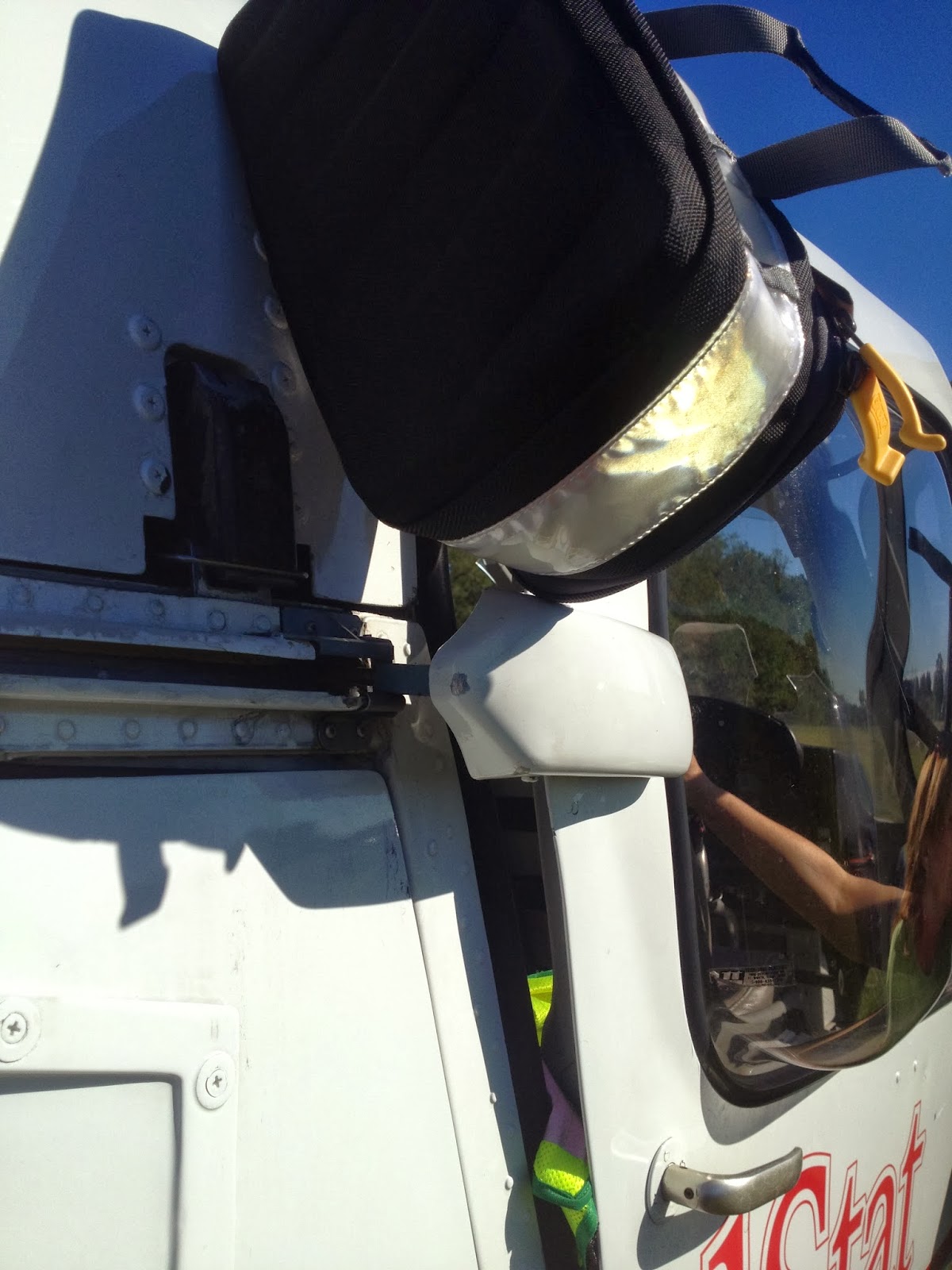 It's migrating season again. Consider your strategies for avoiding birds. 90% of all bird strikes happen below 3000 feet. The faster we go the less time they (or we) have to react - maybe we should slow down when climbing or descending. Consider marking areas where birds congregate, like trash dumps, bodies of water, or other sources of food or habitat on your hazard maps. And talk about this at your briefings.


NTSB Identification: ERA14CA009
Nonscheduled 14 CFR Part 135: Air Taxi & Commuter
Accident occurred Sunday, October 20, 2013 in Madison, MS
Probable Cause Approval Date: 12/19/2013
Aircraft: EUROCOPTER AS 350 B2, registration: N911ES
Injuries: 3 Minor.
NTSB investigators used data provided by various entities, including, but not limited to, the Federal Aviation Administration and/or the operator and did not travel in support of this investigation to prepare this aircraft accident report.
According to the pilot, he was climbing the helicopter through 1,300 feet when he felt an "explosion" in his face that knocked his visor up and affected both his visibility and crew communications. The pilot was eventually able to get his visor back down and land the helicopter, where it was discovered that both windshields were blown out, the center post and the cabin shell were damaged, the doors were blown open and on board medical equipment was missing. On the ground, a crew member stated that just before the event, he had seen a black bird fly toward the helicopter from above and left, but did not have enough time to call it out. Analysis of on board residual bird feathers and a photograph of the suspect bird carcass indicated that it was a black vulture, which can weigh up to 4.8 pounds.
The National Transportation Safety Board determines the probable cause(s) of this accident to be:


The helicopter's collision with a black vulture during climb to cruise altitude.