New 'Copter for Kids in Ohio 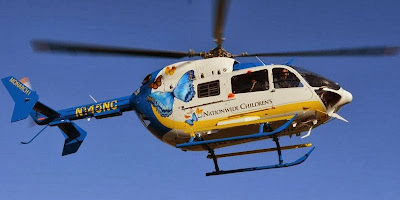 The helicopter is an addition to the existing ground-based and air transport options offered by Nationwide Children's Hospital and MedFlight, their current partner for helicopter transport. The helicopter will be based at The Ohio State University Airport and is equipped with state-of-the-art critical care equipment. This includes IFR technology allowing the helicopter to fly in low visibility and a combination of nitric oxide therapies and High Frequency Ventilation (HFV) for patients in need of respiratory care.

Monarch 1 is the only Ohio transport helicopter that offers this kind of respiratory care for neonatal patients. And with Nationwide Children's Hospital being home to one of the largest neonatal networks in the U.S., with about 30 percent of all neonatal admissions requiring at least a one-hour drive, the helicopter will be a dedicated, specialized resource.

"Minutes count when it comes to transporting critically ill infants," said Edward Shepherd, MD, section chief of Neonatology at Nationwide Children's Hospital. "The addition of this EC145 helicopter allows them to better serve their patient families while increasing the access to the neonatal and pediatric specialty care."

The helicopter also offers a large cabin with the potential to allow a parent or guardian to ride on-board during the transport of their child as well as additional staff to ensure patient safety while in flight. The helicopter will focus on transfers between hospitals and will not land at accident scenes.