You gotta love humans. We never stop being creative. Or lazy.

I was enjoying a change-of-shift discussion this morning with my friend StuD, and I mentioned that I had looked over the entire list of pilots who work for our company. There are a bunch. I brought up a name from our past and he exclaimed - in the negative sense - his opinion of this fellow.

Stu told me a story that I had heard before, but forgotten. Life is like that,  when a mis-step happens to someone else it's not nearly as meaningful as when it happens to you. Perhaps that's why we are not so good at learning from other peoples mistakes - we prefer to make them ourselves and learn the hard way.

One morning, back-in-the-day, Stu was pre-flighting our old Bell 230 and checking out the base fuel system. His shift was following the other fellow in the story, who can remain Nameless. Nameless had developed a habit during refueling the aircraft, which seems kind of neat on the surface, but isn't. He would stick the fuel nozzle into the hole in the side of the helicopter

then use the grounding clamp for the fuel nozzle, which is supposed to be fastened to the airframe to prevent a static spark, to hold the valve lever in the open position. Aviation fueling systems do not have the "catch" on the lever like the one at your local gas station - for a reason. 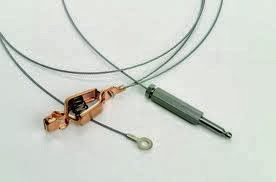 Then Nameless would walk across the helipad to the fuel-system cabinet and switch on the pump. He would watch the counter for the correct number of gallons to be pumped into the aircraft, turn the pump off, then put everything away. Now this is an easy method of dispensing fuel, and saves much walking back and forth to check the fuel counter. It also eliminates the need to actually hold onto the lever while dispensing fuel.

There is no telling how many times Nameless performed his modified aircraft refueling, without incident, but one evening, he got distracted during the process. Maybe it was late and he was tired, or maybe he was talking to the new flight nurse - and something slipped his mind. Whatever - in any case Nameless forgot one little piece of his personal refueling-method before closing the fuel cabinet and heading back to bed.

The next morning, Stu opens the cabinet door and begins to check the system, checklist in hand. He needs to drain fuel from the filter vessel, to look for contaminants, so he switches on the pump, while standing directly in front of the wound up hose sitting on it's reel - nozzle pointed out. 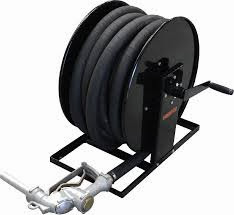 Well, Nameless had forgotten to remove the clamp from the fuel lever, and it was stuck in the full flow position. Stu took a shower.