It's All About the Pizza...

I almost had to buy pizza for my crew two nights ago. We were standing next to our aircraft around 10 PM on a cool still night, waiting for the wheels of health care to grind. As this was my crew's third patient flight for their 24-hour shift, and my first for a 12-hour night shift, our perspectives on going to work were different. I kept my mouth shut. As we waited, I glanced up at the top of my cabin and saw a push-latch sticking up, unfastened!

"Whoa! Crap! how did I do that?" I climbed up on the step and secured it. This kind of thing happens and it's worth talking about. A few years back an incorrectly fastened latch almost killed three people. I met one of them while teaching at their program.

The aircraft had not flown all day or been removed from it's hangar. During the day shift, maintenance called and asked the duty pilot to go out and check a measurement on the fuel control linkage. He did so, and reported closing the left side cowl upon completion. When the night shift arrived, the pilot completed his preflight inspection and later in the shift the crew was alerted for a flight. They opened the hangar door and pulled the aircraft outside. When the door button was pressed to close the door, nothing happened.

Safety Briefing Topic: How does your team deal with a break in the normal sequence of events?

They talked about what to do, not wanting to pick up to a hover directly in front of an open hangar, as this would blow the place up. They decided to drag the aircraft off to the side of the ramp, away from the hangar and away from the lights. They put the tug away and all completed a walk around.

The clock was ticking and they were taking too much time.

When the engines were started, a clinician in back alerted the pilot to "a clicking sound coming from over the pilot's head." The pilot asked her to step outside and check the aircraft on the right side for anything wrong.

She did, found nothing amiss, climbed back in and they departed to the small referring hospital.

When they began a descending left turn for landing a loud BANG was heard and felt through the aircraft and then a severe shaking shuddering vibration made it difficult to fly or think. Fear impacts our ability to reason. The pilot had no idea what was wrong; only that something terrible had happened. He wasn't sure about his aircraft's condition or what to do.

He didn't think that attempting an approach to a confined area was a good idea, worrying about losing his tail rotor or an engine. He pushed the mic button and proposed flying to an airport nearby for a run-on landing.

The crew both emphatically requested landing immediately. As it turned out, that was the right choice. They suffered a cowl opening in flight. 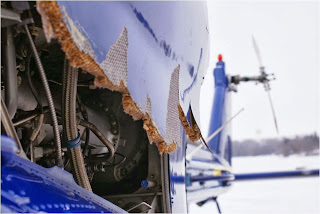 Cowlings have come open many times in HEMS, with varying degrees of damage done to aircraft. The BK-117 was notorious for this, and each time a cowl came open, another fastener was added. At last count there were seven latching or locking fasteners on a BK's side cowlings; only lacking being riveted shut to make them pilot proof.

This aircraft was an EC-145 ( A BK-117C2 ) and as there wasn't much history with cowls coming open, they only had two latches. They look like this... 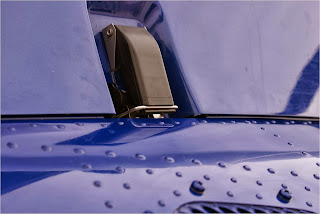 That cowl may or may not be latched - you cannot tell by looking at the plastic cover. The actual "latching" metal buckle is underneath the cover. The cover will not hold the cowling shut by itself.

As I am a human being, and subject to human factors; I ask my crew to help me ensure that, on OUR aircraft, the cowls are latched. To make sure they really look I took a technique from my friend Tim and like him, I have a standing offer to buy pizza for any crew member who finds a latch open on a helicopter that I am climbing into. It's a game with deadly serious consequences; I have bought once.

The crew is actively trying to catch me. The problem with a cowl opening is that when they fly up they get in the way of the action above. 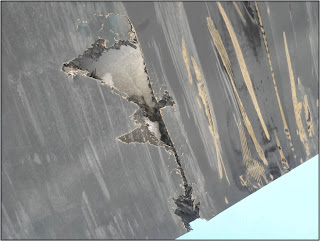 Because the blades are turning so quickly, they are all invariably damaged by anything getting in the way.

In some cases the damage can destroy the structural integrity of one or more rotor blades and could result in loss of the aircraft and crew.

This almost happened to the crew in question, in fact the NTSB experts stated that had they attempted to continue flight to the nearby airport, at least one of the blades would have failed....

Remember that rotor blades experience a tremendous amount of flexing in flight, and the engineers do not add in any structural extra stuff. It's not really a "chopper." If you want to make yourself ill, watch the mast-head video of a BK blade in flight. Watch this after you finish flying for one day...

Video of blade in flight

Over time, we tend to do our walk-around checks with the mental attitude that we are just confirming that all is well. This leads us to see what we want to see and miss what we should be looking for.

We need to look as if something is amiss. Have a critical eye.

Mind you, it's also not enough to simply look UP at the aircraft - we have to look down too. At the the landing gear, the grounding cable, the belly...the fuel cap!

People still take off today with the fuel cap open. It can happen to you too.

When there is something wrong with your aircraft, will you spot it? 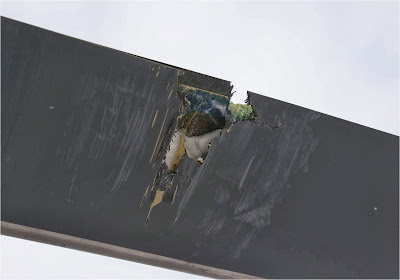