According to the pilot, he was climbing the helicopter through 1,300 feet when he felt an "explosion" in his face that knocked his visor up and affected both his visibility and crew communications. The pilot was eventually able to get his visor back down and land the helicopter, where it was discovered that both windshields were blown out, the center post and the cabin shell were damaged, the doors were blown open and on board medical equipment was missing. On the ground, a crew member stated that just before the event, he had seen a black bird fly toward the helicopter from above and left, but did not have enough time to call it out. Analysis of onboard residual bird feathers and a photograph of the suspect bird carcass indicated that it was a black vulture, which can weigh up to 4.8 pounds.

The National Transportation Safety Board determines the probable cause(s) of this accident to be:

The helicopter's collision with a black vulture during a climb to cruise altitude.

BASH (Bird Aircraft Strike Hazard)
BAM (Bird Avoidance Maneuver)
BOOM (the sound of your windshield exploding in your face - keep your visor down when possible, and your guard up always.

During shift briefings, I like to question the crew members I will be flying with about proximate threats--what will kill us today? In a single-engine helicopter, engine failure comes up a lot. In fact, a bird strike is much more likely than an engine failure and can be more deadly.

On January 4, 2009, a Sikorsky S-76 helicopter hit a Red-tailed Hawk in Louisiana. The hawk hit the helicopter just above the windscreen. The impact forced the activation of the engine fire suppression control handles, retarding the throttles and causing the engines to lose power. Eight of the nine persons on board died in the subsequent crash; the survivor, a passenger, was seriously injured


Some aircraft have plastic windshields, some have glass. The picture above makes clear that even a glass windshield will give way for a big enough bird. 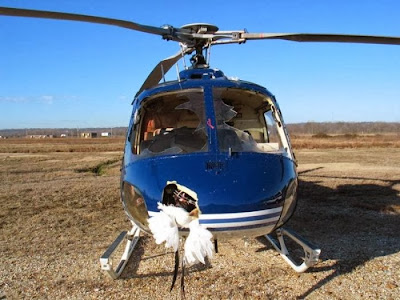 During my initial training with Air Methods, we were told about a pilot who took a bird through the windshield and then suffered a loss of power from both engines!  He pushed the collective down and entered autorotation. As he neared the ground, muscle memory and pattern recognition led him to sweep his hand overhead from back to front to verify that his throttles were all the way forward to the "flight" position, something he had done thousands of times as part of his before-landing checks. The bird had pushed them to the idle stop. He shoved them forward and regained power for a "normal" landing. That's a story I would rather hear than tell.

One of the hallmarks of safe flight operations is the identification of bad things that might happen, and the preparation for their eventual occurrence. We use drills, rehearsals, simulators, and table-talk to get ready for all sorts of unpleasant events, but how can we prepare for a bird coming in through the front window? Perhaps someone who has lived through it might be asked to speak at a safety meeting or group event or write his or her recollection of the event for dissemination. 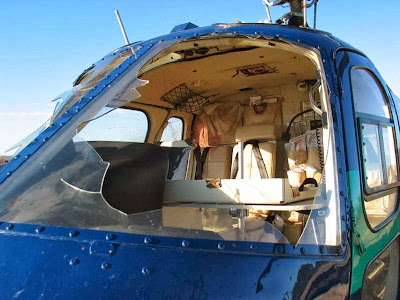 Several years back Dave Andrews, a HEMS pioneer, took a bird through the windshield of a BK-117 in South Carolina. This was before pilots flying EMS wore helmets, and the bird knocked off his headset before going back out through the greenhouse (the small overhead window that allows pilots to see where they are going during a turn). He couldn't communicate with the crew in the back just then, and it must have been quite an adventure for them; waiting to find out if they were going to crash. The wind and noise in the cockpit must be disorienting. Maintaining aircraft control and slowing down are probably hard with a pounding heart and a shaking hand. I have read of crews having trouble figuring out if the blood and loose parts in their faces belong to themselves or the bird. 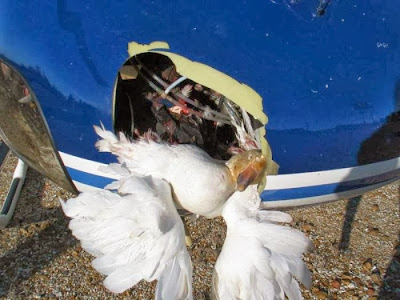 During the day, we can see a bird coming and make a gentle avoidance maneuver. Opinions vary on how to do that. For me, a climb usually works as most birds will tuck and dive when frightened. Some birds go into attack mode and turn into our path. Bird brains!

Striking a bird at night is a scary event for a pilot and crew. I was between Douglas Georgia and Doctor Still's burn hospital in Augusta one night at three thousand feet when we hit a big bird. The BOOM was so loud it brought the patient up out of sedation and so violent it knocked the gel-coat off the nose of our BK. Thank goodness it hit right on the knuckle of the nose. If it had hit a foot above, on the windshield, it would have been inside with us. I tasted copper in my mouth for several minutes.

After that, I began to leave the landing light on during night flights. Research on the effectiveness of this technique is mixed, but for me, it works. I haven't hit a bird since I began leaving a light on. I have always flown with my visor down since I began wearing a helmet for HEMS, but now I am flying at night with NVGs, and the only thing between my eyes and whatever comes through the windshield is a set of tubes.

Here's a bit about a more recent event. This pilot and crew were not as lucky as I and my crew were, on that flight from Douglas to Augusta.

"The helicopter was found on the bank of a reservoir on its right side on a heading about 205°... A post-impact fire consumed a majority of the fuselage... All main rotor blades remained attached to the main rotor hub. All blades were fractured in multiple locations; blade remnants and blade core pieces were found surrounding the accident site... Fragments of the pilot's night vision goggles were located in the area of the pilot controls. During the on-scene portion of the investigation, numerous geese, ducks, and cranes were observed in the reservoir and at another nearby reservoir.

Most bird strikes occur at low altitudes. Flying at or above 3000 feet AGL greatly reduces the risk of a bird strike. Birds congregate around bodies of water and trash dumps; these should be marked on hazard maps and route planning should account for these risks.

During a discussion of bird strikes with HEMS-industry safety-expert  Rex Alexander, he mentioned that a company he was working with analyzed data from all their bird strikes. They found that one model of helicopter they were operating had significantly fewer strikes at night than others. They investigated what it might be about this particular model contributing to this statistic.

The answer? Those machines all have white strobes.

There is at least one vendor selling a pulsing white light as a form of bird strike protection. If you don't have one of these or white strobes, consider leaving a landing light on at night. If you aim it down at 30 to 45 degrees it doesn't totally wash out the image through your NVGs. This might save your life. 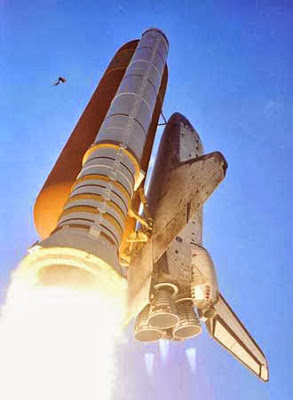