The Problem With Flying a V-22 In The Service of Our Country... 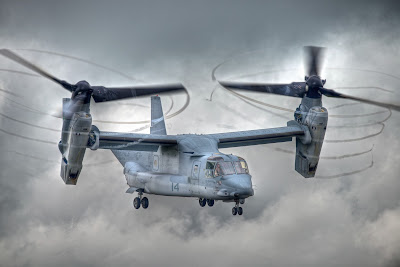 I was contacted by a V-22 pilot who is interested in flying civilian HEMS/HAA. He wanted help getting a job, and I feel obligated to help other pilots when I can, as others helped me.

As I am learning about this powered-lift "catch-22," it becomes apparent that this problem needs attention from the Federal Aviation Administration. A V-22 pilot can fly a machine that can behave like a helicopter - or - an airplane! But their skills and experience are not recognized as such.


catch-22 (a phrase from a 60's era film)
noun
So here's the thing. A pilot who demonstrates exceptional skill during military training - and is able fly both as an airplane pilot AND a helicopter pilot - gets credit for neither skill upon separating from military service. This will tend to discourage the best pilots from entering the powered-lift arena, and will hurt the United States' military. If V-22 time is worthless to a pilot who might want to fly for either Delta OR Air Methods, no pilot will want to do it. There aren't many, if any, powered-lift jobs in the civilian sector.

Clearly, the FAA needs to remedy this situation. Helicopter flight requires a skill-set distinct from airplane flight. The first thing that comes to mind is dealing with the torque reaction from applying power to a rotor system. And then there is hovering... I was a Chinook pilot for 13 years. Chinooks don't react to torque, as the counter-rotating rotor systems cancel torque effects. In fact, a Chinook is so different from single rotor helicopters as to perhaps be considered a different category of aircraft... But it's not. It's a helicopter. A Chinook pilot's flight experience, gained in the military, is a marketable commodity upon separation. We may be a little slow in the toes at first but we figure out which pedal to push. A V-22 pilot is, at present, denied the ability to market her skills as either a helicopter pilot or an airplane pilot. And she has been both!

When a V-22 is hovering, it's a helicopter too. It resembles a Chinook, with a lateral rotor arrangement versus a tandem one. V-22 pilots have to learn all about the pitfalls of rotorcraft flying, like vortex-ring-state/settling with power, and retreating blade stall, and then they have to learn all about the peculiarities of fixed wing flight, like stalls and spins and minimum controllable airspeeds.

Clearly, a V-22 pilot gets taught and tested on two separate categories of flying machine, and they get credit for neither. And this is going to mean that the only career-pilots who fly them will be the pilots who can't make the cut for a more marketable flying experience.

I believe this is a problem that social-media can fix. Here's what to write in your emails and facebook posts to the FAA administrator...

Please help. V-22 pilot time should count for both helicopter pilot time AND airplane pilot time, because these pilots have demonstrated that they can be both. Denying them credit for the skill-sets they have worked so hard to acquire isn't just unfair to them, it will adversely affect our military.