After 30 years of flying; instructing helicopter pilots, and being instructed by them, I can't remember where I first heard this line, "Fly the disk."

I have been thinking about it lately though, considering how appropriate it is for all of us to remember that we must fly, better yet,  we must "be" the rotor disk.

Of course you know the "disk" is the spinning rotor system above our heads. When you are flying, it is life. The speed at which it turns is important. The attitude at which is travels through the air is important too.

Years ago, a check airman recounted a story about flying a Bolkow BO-105 cross-country with oilfield workers on board. A large long-legged fellow was sitting behind the pilot, with big heavy boots on. They were a few hundred feet up when the passenger shifted his feet forward and dropped his boot on top of the collective. It went down to the stop.

The aircraft tucked nose-down. The rotor system went from the normal thrusting state into an abnormal state, in which on-rushing air was passing through the entire disk from top to bottom - not through the action of the moving rotor blades, but in spite of them. This pilot initially had absolutely no control of his rotor disk, and the situation was grim. The trees were right there in front of the windscreen. They were all yelling.

Len told me that he pushed and pulled on the collective and moved the cyclic through all the quadrants trying to get the rotor disk tilted correctly, with the leading edge up. At the last second, just before impact, he did it. Air went back up through the rotor from bottom to top - autorotative state. And then he increased collective - normal thrusting state - and climbed away.

During my last annual training I was flying with a sharp, charismatic young check-airman named Micah. I had told him that I was worried about my autorotation skills and needed practice, and he was having me perform autorotations to a runway. I did a couple of decent maneuvers, got over-confident, then botched one up. I lowered the collective, entered autorotation, then looked at my airspeed. It was fast. I looked at my rotor RPM, it was too high. Then I got nervous and wanted to slow everything down to figure out what was wrong and how to fix it. I began to pull backward on the cyclic.
Micah (like all good instructors) was ahead of me, and had his hand behind the cyclic to prevent this. He said, "don't pull back, you will overspeed the rotor system." If I pulled back on the cyclic, I would tilt the disk toward the rear, nose up, and the onrushing air would increase the already high rotor RPM. I was distracted by indications, I wasn't flying the disk. Note to self: Think about the rotor disk first. Everything else is secondary.

I discussed this topic with a friend who is both a pilot and a writer... She says...

This reminds me of my very first time teaching autorotations as a very low-time flight instructor in the R22. My student (who was exceptionally talented, and remains a great friend) was already a rated airplane pilot, and I had been gravely warned about airplane pilots' tendencies to instinctively push the cyclic forward following an engine failure. So, fearing for our lives, I had sternly warned him, DO NOT PUSH THE CYCLIC FORWARD.

When the time came for him to roll off the throttle and enter his first autorotation, he dutifully pulled the cyclic back — way back! As I watched the rotor tach needle speed toward the red line, all I had the presence of mind to say was "Nonononononononononono!!!" (Which he still gives me a hard time about.) Fortunately, no harm was done, to either us or the aircraft. :)

In HAI's excellent video on autorotations, "Autorotations: Reality Exposed - Revised" available at
https://www.youtube.com/watch?v=YOl2YEH6wFU an NTSB investigator is shown presenting two autorotation scenarios (with video). In one, after loss of power the pilot lowers the collective and applies aft cyclic. This changes the rotor disk from the normal thrusting state to the autorotative state. They land safely. Next the video shows loss of power, reduction of collective, but no application of aft cyclic. As described above, the aircraft tucks nose down - it crashes in a few seconds.

Do you remember the Air France jet that crashed into the South Atlantic a few years ago? The investigation revealed that the pilots either never had, or had lost basic piloting skills.  Basic stick and rudder "air sense." They were so accustomed to being "systems operators" - a requisite skill in such a technologically advanced aircraft as the AIRBUS jet they were operating - that they were unable to cope with the loss of airspeed sensors and autoflight systems.

Our helicopters too are becoming marvels of modern technology. Autopilots are now so light and inexpensive that they are coming to the light-singles that many of us fly. Engine governors, fuel controls, and FADECS have removed the need for us to manage power with a collective twist-grip. The act of flying is easier than ever before. We are becoming less like pilots and more like systems operators. Autopilots will further divorce us from the need, and the skills, to manipulate the flight controls.

An anecdote : PHI Airmedical's chief pilot and I were talking about a Bell 230 that we both had experience with. He had delivered it to his pilots on a hospital contract, and at first none of them were comfortable with operating the autopilot. He recounted that they were reluctant to trust it, and preferred the hands-on approach. He left and came back to the base six months later. They had worn the paint off of the autopilot buttons.

No matter how sophisticated and automated our helicopters become, the time will come when we will be faced with a challenge, a failure, a malfunction. And our lives will depend on our ability to... 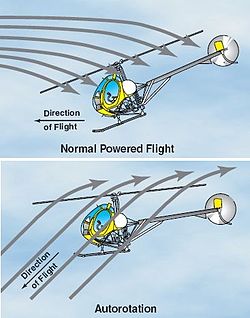