Two AM. One hundred feet above the desert, one hundred knots. A darkness so complete that the goggles sparkle. There isn't enough ambient light for the tubes to intensify, so they make visual static. I am flying a Chinook, with a pilot next to me, another in my jump seat, and a mix of Army Special Forces and Air Force PJs riding in the back. On the ramp, I have two experienced crew members, and in each forward side window a young enlisted "gunner" sits ready. We are heading from KKMC to Rafha to sit "Fat Cow" standby, with tons of jet fuel to give to other helos, or tanks. Our internal tanks have a placard that plainly reads "Not crashworthy, not to be used in combat." But combat changes the rules.

I can barely keep my eyes open. The excitement and anxiety of going to war for the first time had kept all of us awake for most of the day prior. We are well south of the border between Saudi and Iraq, and although we know trouble may come later, not one of us anticipates trouble now. We have our position lights and anti-collision lights on, and are following a route flown repeatedly by Andy and his crew the night prior as they set radar reflectors for inbound airstrikes to use as a final position fix.

From the ramp, Mig's voice, "BREAK LEFT BREAK LEFT MISSILE MISSILE MISSILE." I hear this, understand what I have heard, and do absolutely nothing. I hold what I got, frozen in disbelief. Across from me, Russ says "I have the controls," and he begins a gentle turn up and left. We are four thousand pounds over max gross weight in a self-propelled fuel-air explosive and we aren't going to do much hooking and jinking.  From the jump-seat Don commands, "break phase and break plane, you gotta break phase and break plane!" Don has been to the Marine Corps' WTI course. I have not.

A brilliant flash turns night into stark daylight, and I know I am a dead man flying. My goggles shut down, I look up under them and see the desert floor below us, shadows lengthening as the source of light falls. It isn't a rocket killing us, its a flare (from us?). At that instant, both pilots and one of the two gunners (the one who hadn't launched the flare) realized that we had flare launchers and we all started pushing our flare buttons. Luckily, there is a time delay in the system, or we would have salvoed the canisters. We lumber through some turns, climbs, descents, and Don says, "you need to land and let the guys in back kill these dudes." As no one else had any better ideas, and the "missile" calls kept coming, Russ lands the helicopter; hard and fast. A massive cracking sound resonates through the airframe, and it bounces nose-up and rolls right. We crunch the right rear gear into the rocky floor. Now we can't land here.
God Bless those Lycomings. They screamed at the torture, but pulled us away.

We lived through this experience, twenty five years ago now. I have had tons of time to reflect on things that went right and things we did wrong. It was our first time, and we were all new at getting shot at. For years, we thought they were shooting SA-7s at us; those unseen men in the desert. Later wars have indicated that they probably had RPGs, still deadly at close range, but nothing like the SA-7. The crew on the ramp could only see the flaring, streaking objects. We in front couldn't see anything. Rich Dewald probably saved everyone when he said, in an angry tone of voice, "okay everybody calm down, they aren't anywhere near us anymore."

If only we had had combat training... If only we could have been subjected to that scenario before encountering it "for real." 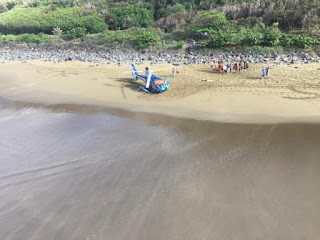 Just over a year ago, the National EMS pilot's association was invited to participate in a rule-making advisory group for new HEMS training rules. NEMSPA sent me.
I was again, "new" and wish I could go back and get a do-over. I did push for more training, better prep for IIMC and engine failures, and even asked for autos to the ground. (Shot down on that one...)

Here's what I should have said...

Training should take into account what we have to do, and what might happen to us while we are doing it. Training should be evidence-based . What is killing us, and how do we stop it? Training should be designed not simply to expose us to new situations that we may have never encountered before, but also to reinforce proper behavior. It should be conducted to the point that when faced with an in-extremis situation, the response will be automatic, conditioned, without thought or hesitation. I think the SF guys called these "battle drills." They trained under fire, so that when they came under fire they would act instinctively.

There are times we need to do this as well. A forced-landing after an engine failure in a single engine helicopter is top of my list. Pilots in training should be subjected to multiple forced landing scenarios during training and evaluations. This could be started in simulators. They exist - today. We should be using them now, not when it's convenient. No pilot should be flying the line who hasn't demonstrated the ability to cope with a loss of power during every phase of flight. There should be some type of confirmation in the actual aircraft, for example...

While in the aircraft, in a downwind at an airport, the instructor will announce "you have an engine failure." The rated-student-pilot will successfully adjust cyclic and collective to enter an autorotational flight profile, will complete a 180 degree turn into the wind, and will position the aircraft such that a successful landing could be completed. The success of the maneuver must never be in doubt and the RSP must be the obvious master of the aircraft. If not able to reduce engine power, discussion of the maneuver will include what an actual loss of power will sound and feel like.

The topic that kept coming up during the meetings was the cost of training. No one wants to be subjected to higher training costs. But consider what one crash costs, in terms of negative publicity, employees who leave out of fear for their personal safety, and of course the loss of human life and destruction of aircraft.

With five fatal HEMS crashes last year, it is obvious that we have room for improvement in the manner in which we prepare pilots and crews to conduct HEMS. We can either fix our problems ourselves, or someone  else will do it for us.