What is a life worth?

Money hates risk, and demands a premium for being exposed to it. Operating a helicopter air ambulance involves high levels of risk.


Do we really prevent death? Do we help avoid pain and suffering? Would we be better off grounding the fleet and sending everyone in a ground-ambulance?

Many in healthcare speak of patients being flown unnecessarily. We who perform the transports have our own opinions; we know that some patients get flown because a rural county simply has no other option. Patients get flown because the paramedic at the scene isn't really sure about injuries, and would rather be safe than sorry. Patients get flown due to distance, or traffic, or road conditions. Doctors at rural hospitals with limited services know that a metro facility has more specialty care capability, and they use a helicopter for both speed of transport and quality of care. Helicopters reduce out-of-hospital time.

The American Health-Care system is broken... Helicopters are band-aids that staunch the flow of blood.

We don't have enough trauma centers, or burn centers, or pediatric specialty hospitals. These are located in areas with dense populations. America is mostly rural, with small hospitals and limited resources. Because the majority of trauma patients come from a lower-income demographic - and are often either uninsured or under-insured - trauma hospitals struggle to make ends meet. The federal government could remedy this, as could society (the citizens of Georgia rejected a $10.00 car-tag tax that would have expanded the number of trauma centers in the state) Patients who become victims of trauma a hundred or more miles from definitive care need a helicopter.

I overheard a remark made by physician in a trauma bay while delivering a motorcycle-crash victim from an outlying rural area : "I HATE HELICOPTERS." Was he joking? I don't think so. The helicopter expanded his catchment area. Trauma services and trauma helicopters are under-supported by the same federal government that makes it mandatory to take care of every sick person that shows up on the doorstep thanks to the Emergency Medical Treatment and Labor Act (EMTALA). A physician in Columbia SC announced that EMTALA is the largest unfunded mandate in our nation's history.

EMTALA killed the rural hospital. - and led to hub-and-spoke healthcare.

Depending on your location and perspective,  you may see over-utilization of HEMS - or you may see it as a last-chance lifeline.   For your anecdote about a patient walking out of the ED within hours of being flown, I have one about a young man shot-in-the-head who had his life saved by doctors who were minutes away by air and hours away by ground. When blood is leaking into a closed space (your skull) it has to be stopped or brains will get pushed out of the way by herniation.

SideBar: I flew that kid. His fraternity brother shot him by accident out in the woods of Georgia. Alison Herrington and Jeff Clifton - nurse and medic - (and I) are praised in a book his mother wrote about Kip's journey to recovery. Jeff Foxworthy held a benefit show in Atlanta for him. 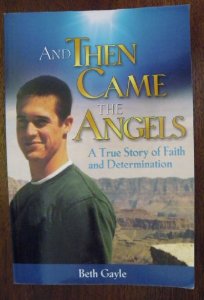 The plural of anecdote is not data. But data can be skewed to further one's agenda. Many of the folks we fly are really sick. Would they be just as well served by a ground transport? Perhaps the only way to tell would be to conduct a human-trial in a representative area of the country. No helicopters - period - for x number of days or months. So what region wants to be first in line for such an experiment? Not mine...

The media is eager to headline stories about HEMS companies' "sky-high" bills. A story about the little guy getting a $53,000 bill for a 10-minute flight is dramatic, and drama sells advertising. It's too bad they don't tell both sides of the story, or even consider what goes into that helicopter arriving at your hospital or accident scene to provide your flight for life.

The patient, who is now healed and out of danger, admits that the transport saved her life and in the next sentence states that there is "no way it costs that much for the helicopter company to provide that ten-minute flight."

Imagine you want to start a helicopter ambulance company. You arrange to lease a helicopter, a three or four or ten million dollar asset that burns buckets of money even when sitting still. When you fly the aircraft and add in the direct-operating-costs, the numbers get much bigger. People who know nothing about aviation have no idea that everything involved is much more costly than "what it should be." Incredibly expensive components like engines and transmissions and rotor blades have a finite service life - every hour of  flying  may cost $400 to $1200 dollars beyond the daily lease rate. Now insure the hull.  Insure against an accident, insure against a mistake. The bill to operate your air ambulance grows. Now hire 14 professionals - each of whom has spent years acquiring the requisite education and experience to perform the job. Four pilots, four nurses, four medics, one mechanic and a program manager to keep everything running... Let's swag the bill for staff at $100,000 per person (training, checking, salary, benefits etc.) Then you need a base of operations and must also help pay for a communications center and, if this is your tenth aircraft, an operational control center. Now consider equipment that you have to buy and maintain.  And utilities. And supplies. It's a 24/7 proposition and the meter is running continuously. Those salaries and the aircraft lease and the rent for the quarters and the equipment maintenance etc. etc.- those bills come due every month, whether we do 1 flight or 100.

Before we have performed our first flight we have spent a couple of million dollars.
There is a huge investment required. And a real risk of losing it. Some patients balk at the costs involved - perhaps they are lulled into a false sense of what healthcare really costs by EMTALA and assignment and constantly being told that healthcare is a "right". Some people think that insurance is a blank-check. Or they assume that whatever their insurance pays is all they are responsible for. Too bad more folks don't actually read their policy.


I met Debbi at a Mexican restaurant near where I live. She is on the smart side of fifty and has a lovely smile and bright personality. After we spoke for a few minutes she told me about her experience with HEMS. I asked her if we could meet again, as I wanted to interview her for this post. She agreed. She showed up with her CPA daughter, I brought my in-residence clinical expert (the flight nurse I am married to).

She was working at a self-storage facility one day, speaking to a customer at the office counter. She felt something "different" in her head and knew immediately that it was a serious problem. She maintained eye-contact with the customer, but with her hand lifted the phone handset off its cradle. That's where her memory stops for a time. Her next recollection is waking up while laying on the floor, looking up at a police officer who was staring at her intently. She wanted to talk to him but her mouth didn't work. She heard him say, "we had a 911 call..."

As he turned and walked away she felt an overwhelming sadness. She thought, "please, please don't leave me." He wasn't leaving, he was going to get the ambulance crew.  She remembers nothing else about her event. The crew took her to the burn center in Augusta, Georgia. They have an ER there and it was the closest hospital. The ER doctor was pulling a shift for some extra money and wasn't the kind of doctor she needed. As luck would have it, he had only recently read a fact-sheet about a new treatment for head-bleeds being offered at Emory hospital in Atlanta. The doctors at Emory had devised a method to stop head-bleeds by using a coil inserted through a blood vessel to the point of rupture. This treatment was what Debbi needed, and she wasn't going to survive a ground trip. 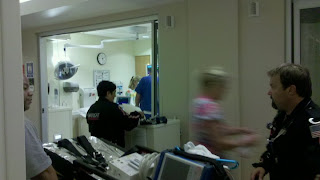 Debbi did survive her trip and her bleed. Then she had two more head-bleeds and had two more coils put in. She is a very lucky lady. When she finally came to, her daughter told what the doctors had said. Most people in her shoes are dead-right-there. If not DRT, they suffer severe impairment, and are never the same. Almost no one with her type of bleeds gets away unscathed.

Debbi is 100%. Her bill for her flight was $27,000.00 Her insurance didn't pay one penny of it. In fairness, her total bill for treatment of about one and a quarter million dollars ate up her coverage. She has no regrets. She worked and paid off her HEMS bill. She considers it a blessing that she is here to pay bills. She told me that the bill for her morphine was also $27,000.

You won't be reading any stories in the newspaper about sky-high hospital bills. And the stories about the helicopter bills won't tell you the full story. They won't take the time to investigate the success stories, because good news doesn't sell paper or advertising. Here's our bit of good news, HEMS saves lives.